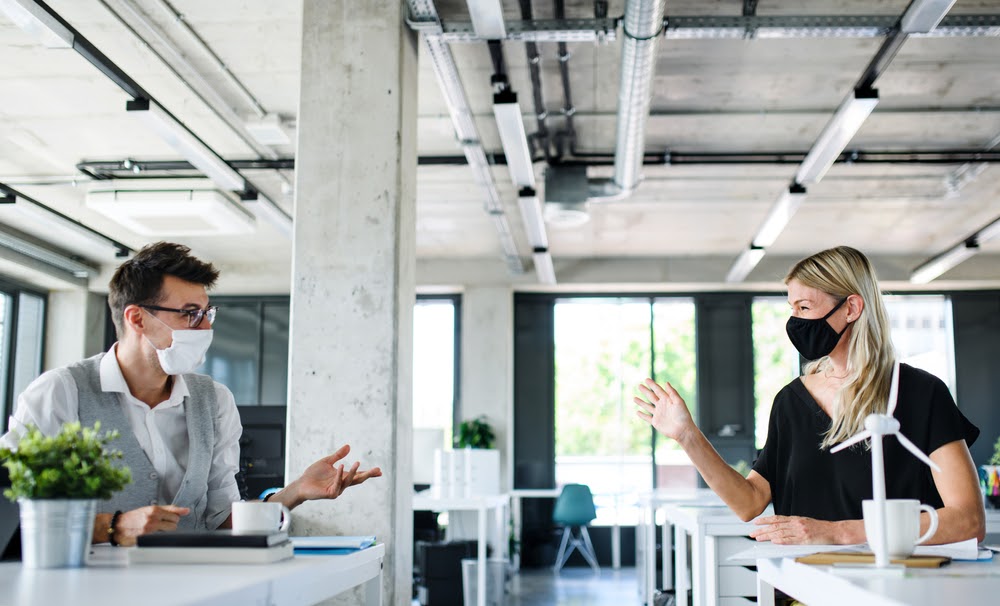 2 min read December 2020 — The flexibility required of companies throughout the course of the COVID-19 pandemic revealed the comfort and capability of working from home to many employees. How that impacts the future of office space will be determined in the coming months as vaccines are distributed and employers decide to move forward with traditional offices or modern flex spaces.

While the number of employees in offices may decrease, Larry Richey, Florida managing principal of Cushman & Wakefield, believes that the demand for office space will remain the constant. “When we ultimately put COVID-19 behind us, we think that there will be a large number of people who will go back to work at the office full time. Others might split that. But we don’t think that it will necessarily reduce the square footage of office space occupied because there’ll be greater distancing. There’ll be a shift to less dense offices,” he told Invest:.

Although this may hold true in the future, commercial real estate developers are starting to see the effects of COVID-19. Since March, there has been over 700,000 square feet of office space added to sublease availability, bringing the total sublease availability in Tampa Bay to 1.5 million square feet. It is estimated that 850,000 square feet of the sublease market is already vacant. When factoring in sublease vacancies with direct vacancies, the total market vacancy rate is just under 15%. Equally important to the future of Tampa Bay office space is the 1 million square feet that is under development. With major construction projects in Water Street, Midtown, and the Heights, office space in Tampa Bay will be at a surplus in the coming months. Despite these developments the price per square foot has remained steady at $30.56, a 4% increase year over year.

Conversely to the traditional office space, flex space companies are looking to expand their footprint in the Tampa Bay region, setting up a clash between traditional office spaces and modern alternatives. Chicago-based coworking company Novel has officially opened its St. Petersburg location, the company’s fourth space in Florida. Novel purchased a five-story, 53,106-square-foot building in February and has since completed renovations. The flex space facility offers monthly passes for individual workers as well as office suites that are priced per employee. Novel’s 24/7 access to the facility, coworking lounge and included utilities will directly compete with the 1-million-square footage under construction for tenants.

It is important to note that not all flex spaces are seeing success in Tampa Bay. Well-known flex space pioneer WeWork killed its plans to open a 50,000-square-foot, 800-member coworking space in Heights Union. It subsequently opened a location in Downtown Tampa at 501 E. Kennedy Blvd., renaming the tower WeWork Place. WeWork is attempting to consolidate its portfolio for profitable growth, “Moving forward, we remain committed to the Tampa community and establishing WeWork Place as WeWork’s flagship location Downtown. In consolidating these two locations, we look forward to providing our members with first-class, flexible space solutions in Tampa.”

By and large, the future of Tampa Bay office space may lie somewhere in between modern flex spaces and traditional office layouts of the past. The combination of pandemic-related office software and flex space developments within the region will give Tampa Bay residents the freedom to choose what type of work environment is most productive for their field. Traditional office spaces will have to compete for leases in a future where Forbes predicts 35% of corporations will be using flexible office space within three years, setting up a future where employees look for the most convenient solution.