Will Underground Atlanta’s rocky road to redevelopment have a happy ending?

Will Underground Atlanta’s rocky road to redevelopment have a happy ending? 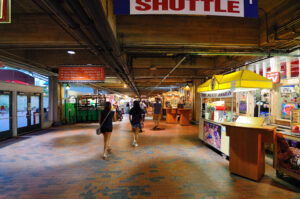 This comes after the sale of Underground Atlanta by WRS Inc in November. The developer stalled for years on the redevelopment and failed to secure many successful projects. A few retail stores like a souvenir store, a Chinese restaurant and a hookah lounge are open. WRS Inc. had announced a hotel, LGBT-centric nightclub and an apartment complex as its first additions to the redevelopment project but progress did not get underway. When the right buyer with the right capital came along, WRS Inc. sold and passed along the hefty task, considering most of its tenants had not paid rent during the pandemic. According to a lawsuit filed against WRS Inc. in Georgia State-wide Business Court by Atlanta developer Dion Meltzer, that debt forced WRS Inc. to sell. The suit claims that WRS Inc. was “operating with negative monthly cash flow for months” and would have had to default on its loans otherwise.

This sale resulted in only a small hit on the property’s value in spite of COVID-19. WRS finalized its purchase of Underground Atlanta for $34.6 million only a few years earlier. Billionaires Funding Group is reportedly paying $31.6 million for the property, according to the Atlanta Journal-Constitution.

The acquisition adds to recent activity in Atlanta’s Downtown. CIM Group of Los Angeles has a $5 billion project at the Gulch railroad site in the works for offices, residences and hotel rooms, while German developer Newport will execute a $100 million renovation of the empty 222 Mitchell Street building, as well as various activities in surrounding properties.

Underground Atlanta was known for the annual Peach Drop on New Year’s Eve and for being a restaurant and nightclub district in 1969. Its story has been rocky since the 1980s though, during which it became a stop for vagrants. So far, Billionaires Funding Group’s marketing to restore Underground Atlanta’s relevance has been fruitful: when it announced leasing availability, it received more than 50 inquiries. The property’s indoor food court may be the first to open. A component that may be retained from WRS Inc.’s plans is a podium for a midrise building over the MARTA and freight-rail tracks bisecting the property, which will employ the help of Kimley-Horn.

Now comes community meetings to adhere the redevelopment plans to the identity and needs of the community, Lalani said in a news release.

“We continue to engage in conversations with city officials and neighborhood organizations to better understand the need in the downtown market and how Underground Atlanta can fill that void,” Lalani said in the emailed statement to the Atlanta Business Journal.