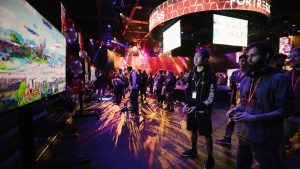 Over the last few years, Orlando has been increasing its presence in the esports scene. Already home to numerous simulation, training and tech companies, there’s no doubt about the City Beautiful’s potential as a main driver in the gaming arena.

One of the pillars in Orlando’s gaming scene has been Full Sail University. The institution opened The Fortress last May, which is the largest esports arena on a college campus in the nation. Since then, it has attracted several major events like an NBA 2K League competition and a qualifying event for the Red Bull Conquest.

“When we were planning and building The Fortress, we knew, like other facilities on campus, it would need to function as a professional-caliber facility since we are educating our students to work in the real world,” said Full Sail President Garry Jones in an article from the Orlando Sentinel.

Although the esports boom is just starting and there’s only a handful of arenas in the country, these events represent a boost to the economy, especially with the presence of teams and fans attracted by the tournaments.

A recent report from WalletHub ranked Orlando as the fourth-best city for gamers and No. 2 for gaming environment. The study compared the 100 largest U.S. cities across 23 key indicators of gamer-friendliness.