Who cares if Miami is underwater? Well, Miami.

Who cares if Miami is underwater? Well, Miami. 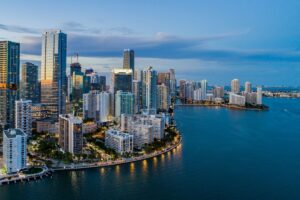 2 min read May 2022— Environmental concerns took center stage in Miami over the past month, with bankers, developers, local officials and residents all sharing their thoughts on what the environment means to the city’s future.

In a panel at the Financial Times Moral Money event on May 19, Stuart Kirk, global head of responsible investment at HSBC’s asset management division, lamented the warnings posed by climate change activists and the climate crisis overall, telling the panel that there’s always been “some nutjob” talking about the end of the world, reports Investment Week.

During the course of the livestreamed event, Kirk mentioned during a speech titled “Why investors need not worry about climate risk” that while he does not doubt the science behind climate change, “Who cares if Miami is six metres under water in 100 years?” He concluded with the average length of a loan at HSBC, 6 years, as sufficient enough reason to focus on making money instead.

The following day, HSBC Global Asset Management’s CEO Nicolas Moreau told Investment Week the remarks  “do not reflect the views of HSBC Asset Management nor HSBC Group in any way.” Kirk has since been suspended.

In contrast, Miami and its residents made their concerns regarding sustainability and the city’s long-term environmental future over the last week loudly known. The same day as Kirk was delivering his comments, residents made their thoughts heard over the proposed expansion of the county’s urban development boundary (UDB), proposed by the developers of the South Dade Logistics and Technology District (SDLTD), as the county commission voted on whether to expand the boundary or not.

Proponents of the project argue it will generate anywhere from 7,000 to 11,000 badly-needed jobs in the mostly residential areas of South Miami Dade County. Community organizers and local residents vociferously opposed the proposed expansion and development, citing increased flooding, damage to the local aquifer, and that there are other locations that fall within the UDB that could accommodate the project. Hundreds came out to the hours-long meeting, with well-known local banker Leonard Abess, who owns 160 acres within the proposed expansion and stands to make over $100 million from the deal, saying, “This is one of the biggest frauds in the community.”

Mayor of Miami-Dade County Daniella Levine Cava said during the meeting that “By denying this application, we are guaranteeing the necessary land to continue with the critical Everglades restoration.” She also noted that agriculture was the largest industry, second only to tourism, within Miami-Dade County, and that an 800-acre reduction in the land available could create a scenario wherein the agricultural sector could no longer be sustained. Agriculture, and the wider Everglades ecosystem the land finds itself a part of, are critical to the county’s future due to its role in the region’s aquifer,opens PDF file providing the drinking water to eight million people across Florida.

Miami and the wider Miami-Dade County region has worked to center sustainable development and policyopens PDF file in response to mounting environmental pressures. The county’s aquifer is already at risk as a result of sea level rise that will continue to leach into the aquifer and threaten water supplies, as well as the billions of dollars worth in waterfront properties. Local architect Eddie Seymour of Flux Architect for Invest: Miami 2022 detailed some of the regulations that had been implemented to account for the climate reality. “One of the changes that we’ve seen locally is the requirement to raise the floor level of any new structure within high risk flood zones or waterfront. That is a simple change, but can potentially save billions of dollars in property damage down the line. It’s the right step to take in low-lying coastal areas like Florida,” said Seymour.

For the same issue, Cava explained to Invest: her desire to make Miami-Dade the center of the emerging blue-green economy.“Much like the rest of the nation, we have aging infrastructure but we need to build it back in ways that recognize the environmental challenges of rising sea levels, storm surges and climate change. There’s a lot at stake as we look to the future in terms of what we’re building and all the while we want to make sure we’re at the forefront of the blue-green economy,” said Cava.

The county commission will hold its final vote for the SDLTD on June 1.