When is urban, not urban?

July 2017 – With some of the most respected universities in the U.S., an abundance of well-paid IT jobs and an arts and leisure sector to rival any other major city, Atlanta is seeing a large influx of young professionals. With this changing demographic has brought new opportunities for the real estate sector. However, the image of classic white picket fence with a car in the driveway is disappearing as professionals want to be closer to their place of work, amenities and areas of social activity.

In January 2017, the City of Peachtree Corners, part of Gwinnett County in North Atlanta, saw the breaking ground of a 300-unit, 39-acre mixed-use 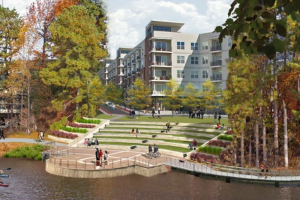 development. Once completed, the Overlook at Twin Lakes project, developed by Brand Properties, will feature modern retail, cyber cafes, a pool, a gym and dog park. Accommodation will be mainly 2-bed apartments. The main impetus behind the development is to house the young professional demographic, many of whom are attracted to the area because of the nearby Technology Park, a mixture of IT companies and coworking opportunities.

“The new trends in coworking environments mean that office development is mixed with hospitality and residential. Companies are using the new generation of offices as a way of attracting and retaining the best talent,” Kurt Hartman, senior managing director – Atlanta for Hines told Capital Analytics

The development is part of a growing trend across the U.S. that recognizes the differing requirements of young professionals, or “millennials”. In a poll conducted by National Association of Realtors and the Transportation Research and Education Center at Portland State University the 18-35 age group showed a strong preference to walking over driving as a method of transport. The gap of 12 percentage points of 71 percent for driving to 83 percent for walking suggests that environmental and health concerns are influencing the way people want to travel. With demographics in Atlanta shifting towards the 18-35 age range, these are facts that developers and agencies need to take into consideration.

“The corporate relocations have been a big deal for Atlanta. Young professionals are coming into the workplace and want to live in dense, urban communities,” Kirk Demetrops, principal of MidCity Real Estate Partners told Capital Analytics.

However, although an increase in employment opportunities drove a net increase of 10 percent for renters in the urban areas of Atlanta from 2010-2015, according to rentcafe.com, the high price points are still turning off the younger demographics. “Affordability is going to be a huge issue as we head into the future. If you look at Midtown, the apartments are reaching unprecedented highs. Millennials will not be able to keep up with $2,000 for rent. We want to focus on projects that have density and affordability,” Brent Story, president of Avalon Real Estate told Capital Analytics.

The same survey suggested an increase of 26 percent for the same time frame for suburban areas. In 2017, average rents for suburban vs urban saw a difference of around $200 per months with urban asking $1,277 and suburban, $1,006. This is a difference in line with areas such as Chicago and Los Angeles. All this points to the rise of the mixed-use development in an attempt to create urban feel and convenience in a suburban setting, with Alpharetta, Roswell and Tucker all becoming places of attraction.

With slower wage growth, the trend of starting a family later and an emphasis of flexibility means the 18-35 age group are leaving it longer than ever before to buy homes, creating investment opportunities for letting agencies and driving rent prices, although Atlanta still offers great value. “Atlanta is still considered to be affordable. New industries and increase in job growth will keep rents at the current price levels, but the increase in prices won’t be as fast as it was before,” Jeffrey Graham, managing partner of the Graham Group told Capital Analytics.

The Atlanta real estate market was one of the worst hit by the recession of 2008, with unemployment peaking over 10.5 percent in 2010, 0.8 points above the national rate of 9.7 percent. The growing demographic of young professionals points towards a decade of healthy recovery, and is one welcomed both by the real estate sector, as well as the Atlanta area as a whole.

“People in Atlanta are vested in making this a place of prosperity. This is evident by the growing number of graduates staying in Atlanta,” Monetha Cobb, managing director of Franklin Street told Capital Analytics.

With so much investment going into new-style developments, it seems likely that growth will continue.