What to do this Memorial Day weekend in Dallas-Fort Worth

What to do this Memorial Day weekend in Dallas-Fort Worth 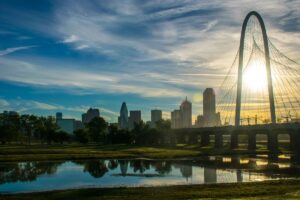 2 min read November 2021 — Memorial Day is here, and it’s time for family, fun and some reflection. The Metroplex is primed with local events for all ages. Whether you want to rock out, march or just relax with loved ones, there’s something that suits everyone this weekend. Invest: explores the various ways to spend this Memorial Day in the Dallas-Fort Worth region:

Over 9,000 are expected to attend the annual Day of Remembrance at DFW National Cemetery. The ceremony begins at 11:00 am, and guests are required to park at The Potter’s House church. Shuttle buses will run from the church beginning at 8:00 am and will also be provided at the end of the ceremony to take participants back to the church. The event is free and water will be provided.

Families are encouraged to bring their lawn chairs and blankets to Klyde Warren Park in Downtown Dallas on Saturday for a Memorial Day weekend movie marathon. This event, part of Movies in the Park series presented by Scott K. Gingsburg and Family, will feature the following films:

So What Music Festival

Third String Entertainment is back with the So What?! Music Festival. For the first time since 2017, the festival will merge metal, rock, rap, hip-hop, alternative and pop-punk at Choctaw Stadium in Arlington from May 27-29th.

The weekend event will include performances by big name acts like Trippie Redd, 2 Chainz, Rebecca Black, Palaye Royale, Princess Nokia and a host of others. Tickets are $109 for each day, $299 for all three days

Carry The Load began as a Memorial Day march around White Rock Lake in Dallas in 2011, raising nearly $50,000. A decade later, the organization hosted 100 rallies in 48 states, and last year over $2 million was raised to honor and support those who have served the nation.

This event promises to be the biggest carne asada festival in the Metroplex! Pizza Patron will present more than 25 of the best authentic street food vendors, as well as games and entertainment. The event will also feature performances by Slim Thug, Nina Skyy and Paul Wall. Children get in free with a donation of two canned goods.

Memorial Day is synonymous with barbecue. Patrons can choose from the Brisket Love or the Burnt BBQ plates as they listen to country music, enjoy a craft beer and take a ride on the mechanical bull.

For the serious barbecue enthusiast, there is also a VIP Balcony ticket which includes access to the 2nd Floor VIP Balcony, a BBQ Plate, a select 12oz Unlawful Assembly Beer and access to complementary brewery tours throughout the day.