What live music and art look like, one year after lockdown

What live music and art look like, one year after lockdown 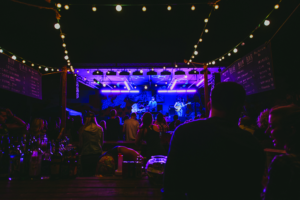 2 min read March 2021 — What will the future of live art, music and entertainment look like in South Florida as the region emerges from the pandemic? While some signs are emerging, it’s not a one size fits all proposition.

For the residents of the quiet Flagler Village neighborhood, the hope is that it won’t take place in their backyard. Many taxpayers fear that a lot that was promised to become a park will be converted into a music venue and restaurant space by Revolution Live owner Jeff John, spanning two acres. Within the Downtown city’s master plan, the lot has been promised to be a park since 2003.

“We have worked on that being a park since 2003,” said Doug McCraw, founder of FAT Village Arts District, to the Sun Sentinel.

Since the pandemic began, sentiment against large gathering spaces have heightened, and live music and art have gone almost silent besides virtual concerts and exhibitions. As vaccine distribution continues to expand to younger age groups in Florida, many wonder if and when the live entertainment experience will return to its pre-pandemic glory.

On Miami Beach, the North Beach Bandshell tested the waters of live music in February with its first residency of the year, Dumpstaphunk from New Orleans. The venue operated at 30% capacity with seats purchased in sets of two, four or six. Those sets of seats were socially distanced through the venue, with guests expected to stay in their seats and adhere to mask wearing rules. The open air event was mainly touchless; concessions were brought to guests with the use of an app. The event went off seamlessly, with people remaining in their groups of chairs dancing and with roomy walkways in between each set.

The Art13 art festival in Fort Lauderdale will take place March 10-March 13. It will take on the challenge of combining art, live music and entertainment during the COVID-19 pandemic. Each event will take place in an empty retail space and warehouse space and will allow for interaction from patrons. One of the real estate developers offering warehouse space is Abby Laughlin, the vice president of Central City Alliance. She said to the Sun Sentinel that a live and engaging event like a festival provides the adventure and excitement that people are craving.

“People are very hungry for this type of experience,” said Laughlin. “And they are hungry for new places to go and new things to see. People seem to be hungry for the interaction.”

Pent-up demand for live entertainment is primed to explode. However, COVID-19 still presents limits in 2021 in meeting that demand at its largest, loudest and most overcrowded.

The 2021 iteration of Ultra Music Festival, which typically attracts around 170,000 attendees yearly, was officially canceled in February. The festival, which was originally scheduled to take place March 26 through March 28 inside Bayfront Park, has been scheduled to return in 2022. This marks the second year that the COVID-19 pandemic has caused a cancellation for Ultra.

Event planners in South Florida are intent on meeting demand for exciting live experiences in creative ways as the region emerges from the COVID-19 crisis.