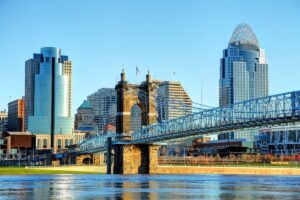 2 min read May 2022 — The call for upgraded stadiums, arenas and event spaces has not been lost on Cincinnati. A number of facilities have been completed, are under construction, or in the planning stages to make the region a prime destination for national and international tourists.

Leading the pack is TQL Stadium, which has officially been a staple of the city for one year. The facility has already seen its share of events. The stadium has hosted 22 Major League Soccer matches, weddings, award ceremonies, special receptions and business meetings in 12 months, with over 527,000 people walking through the gates over that period. The stadium was also nominated for “Sports Facility of the Year 2022” by the Sports Business Journal. At Wednesday’s awards ceremony at the New York Marriott Marquis, the top honor went to Seattle’s Climate Pledge Arena

“The stadium has been an economic driver attracting thousands of fans to the city and county,” said co-CEO Jeff Berding in a statement released by FC Cincinnati. “In its first year, TQL Stadium has already accomplished our goal to be a wonderful representation of Cincinnati across the nation and on the world stage.”

Another recent addition to the Cincinnati venue scene is the Andrew J. Brady ICON Music Center at The Banks. This riverfront music venue, which opened in 2021, includes a main floor and two balcony levels. That gives the inside stage a capacity of 4,500 while the outdoor stage will accommodate 8,000 patrons. Artists including KEM, Leela James and the Foo Fighters have already graced the ICON stage in its inaugural year.

The opening for the Spooky Nook project, which was initially scheduled for late March, seems to be getting back on track. North B Street is scheduled to open this month after being closed to traffic for two years due to construction. This is a positive sign that work on the country’s largest indoor sports complex is nearing completion. The city is waiting until the $165 million project is finished to reopen the street.

The construction plans also include a hotel, ballrooms and other entertainment entities. This portion of the development is known as the Champion Mill Conference Center. Located between the Great Miami River and North B Street, Champion Mill encountered minor delays, including window deliveries and the availability of items such as paint, furniture, fixtures and equipment.  These challenges, however, did not cause a delay in the opening of this portion of the Spooky Nook project. In fact, the 233-room Warehouse Hotel opened its doors to guests just last week.

“We will be shifting gears as a city, moving from local clientele to a blend of locals throughout the week and tourists on the weekend,” Dan Bates, president and CEO of the Greater Hamilton Chamber of Commerce, told Invest:. “In the future, we will host between 10,000 and 20,000 tourists every weekend throughout the year. The model of Spooky Nook is for people to stay within a 45-minute radius of the city.”

There have also been conversations surrounding building a new arena for the Queen City. In recent years, Cincincinnati lost bids for the Republican National Convention and NCAA Men’s Basketball tournament games. A new arena could up the region’s appeal to host major concerts, national sports events and political conventions.