Untangling the uncertain future of office space in Atlanta

Untangling the uncertain future of office space in Atlanta 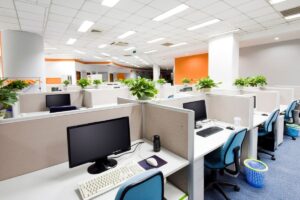 2 min read February 2022 — Atlanta’s office market is tackling high vacancies in the wake of the COVID-19 pandemic and the resulting change in attitude toward communal workspaces, ending 2021 with the highest office vacancy rate in a decade.

The high vacancy rate — 16.7% at the end of last year — comes as companies across the country have started to return to the office, many employing hybrid work models. But the return has been countered by a slew of new inventory that came onto the Atlanta market in 2021, the largest amount of new inventory to hit the office segment in the region since 2002, according to the 2021 fourth-quarter report from Colliers.

Many of the vacancies for 2021 were already in the works pre-COVID-19, including consolidations by Cricket Wireless, State Farm, Cox Automotive and BB&T. In a positive turn for the market, leasing activity increased in the third-and fourth-quarters of the year, with companies like Microsoft, Anthem and Norfolk Southern moving into large office spaces. In all, despite 2 million square feet of office space absorbed since July, the market had difficulty recovering from the first half of the year, which saw a negative absorption rate of 3 million square feet in the first quarter alone, as well as delivery of 4.7 million square feet of new office space.

Despite the cultural shifts during COVID-19, many remain confident the office market will come back, albeit with some changes.

“Working from home has begun to fray relationships and the company culture. There are so many networking opportunities available in a corporate office space,” Jeff Shaw, CEO of BridgeCRE, told Invest:. “Working from home will also affect consolidations and redundancies. Companies can now take less space and rotate people, which works from a business perspective. Essentially, all these decisions being made right now are part of an experiment. … This trend will be interesting to watch in the next year.”

The type of office space in demand is also changing, with the environment companies are creating becoming a pivotal point in employees’ willingness to commute back into the office.

“It’s incumbent upon us to create spaces and places where people want to spend their time,” said Colin Connolly, president and CEO of Cousins Properties, in an interview with Invest:. “As we look forward, those types of spaces are going to be a blend of traditional workspaces with attractive common area environments, whether that’s at the lobby, an outdoor space, ground level or up in the sky.”

“We have seen suburban properties showing greater resilience than the properties in Central Business Districts. And that’s not just a result of COVID, it’s also a result of some of the crime and security issues that people have been experiencing. In Atlanta, that’s particularly true in a market like Buckhead where security has become a concern. We feel pretty good about our concentration of properties in the suburbs, as we’ve been a strong beneficiary of such locations, however,” John Davidson, CEO of Parmenter Realty Partners told Invest: in an interview.

Davidson said some companies seem to perform well in a work-from-home environment, such as call centers and insurance companies. But companies that succeed based on innovation have suffered.

“It was really easy at the front end of the pandemic for companies to work from home because there were already projects and initiatives underway. But as the pandemic has worn on, innovation has fallen off,” Davidson said.

Other factors impacting Atlanta’s office market include the migration of companies from high-tax, high-regulation areas like California and New York to Southern states like Georgia, Florida and Texas — all of which offer business-friendly tax regimes and policies.

“While there continues to be some ambiguity around office at a macro level, what’s become clear is the migration to the Sun Belt and the flight to quality have certainly accelerated. That has validated our strategy and positions us well as, hopefully, we put COVID in the rearview mirror at some point,” Connolly said.

The Marcus & Millichap fourth-quarter office report notes that, while the short-term outlook was heavily impacted by the new office space coming online, the economic and demographic factors in the area will provide foundations for improvement. Notably, the report speaks to the pace of household gains, driven by migration to Atlanta, which is expected to rise to 2.5% in 2022, with new residents finding employment with high-tech firms, such as Google and Microsoft, and with other firms relocating to the area.

Overall, the market outlook for 2022 trends positive, though challenges remain, including uncertainty around the COVID-19 pandemic, the rise of the work-from-home culture, inflation and high construction costs.

“There is a bit of a misconception that there is a discount or some distress in the office world. The pricing really does not reflect that on most of the deals that we’ve pursued. There is somewhat of a disconnect between investor expectations and what materializes on the other side of the transaction,” said Davidson.