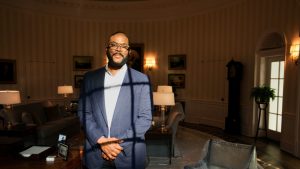 2 min read November 2019 — Hollywood and the movie industry have enjoyed a symbiotic relationship since the days of Charlie Chalpin, Humphrey Bogart and Bela Lugosi. However, in the 21st century, multi-hyphenate film mogul, Tyler Perry, has been keen on proving that successful movie production outside of California is possible. In October, Perry unveiled his new 330-acre Tyler Perry Studios, built on the grounds of Fort McPherson in Atlanta, a former military base in Atlanta that Perry purchased in 2015. While the state of Georgia has consistently attracted new movie and TV productions to the region via tax incentives, the man behind Madea’s crazy family adventures has been busy on and off the camera promoting Georgia and the Atlanta Metro Area as a venue for productions of all sizes. Now, with his new studio in full swing, Perry has a new base to challenge Hollywood for the audience’s attention, praise and profit.

Tyler Perry Studios is the largest film production studio in the nation. It also makes Perry the first African-American to have sole ownership of a major film production studio. “We are a major player in film and television, and now we have the facilities to rival Hollywood – so come, bring your productions,” Perry told Atlanta Business Chronicle in late September. Georgia’s current tax credit system, in which studios can earn up to 30% tax credits on total production costs, has led to a boom in movie business in the region. It estimated that Georgia’s film and television industry generated close to $2.7 billion in economic impact in 2018 with over 300 productions in the region.

It is likely that you have seen a show or movie shot in Perry’s former studio, also in Atlanta. Several top productions have used his facilities to wow audiences, including Marvel’s “Black Panther,” AMC’s “The Walking Dead,” and “Pitch Perfect 3,” aside from Perry’s bevy of brand-name shows and movies. The new studio features 12 state-of-the-art sound stages, 200 acres of picturesque green space, over 40 Victorian style homes and even a replica of the White House. Perry, who is an avid lover of architecture, still has 200 acres of space to continue to build elaborate stages suitable for any type of production.

Perry’s most recent productions, “The Oval” and “Sistas,” have drawn over 3.3 million viewers at night on BET+, the network’s streaming platform. In October, along with the grand opening of his studio, Perry announced two more series are set to premiere in BET+ in 2020. Fans can add the new series “Bruh” and “Ruthless” to their watch list sometime in the new year. Aside from being a world-class movie production site, the new studio will also serve as host to global events, concentrating the world’s eyes on the Atlanta Metro Area.

To learn more about our interviewee, visit:  https://tylerperrystudios.com/