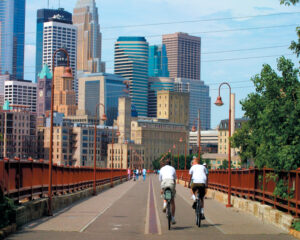 The firm was founded in September by commercial real estate veteran Steven Buss with the goal of making infill industrial acquisitions throughout the Midwest, and in particular, midsized markets where the opportunity to add value is strong.

While other sectors of the real estate industry struggled throughout 2020, industrial surged as a result of the explosion of e-commerce growth and the shift to online ordering and fulfillment. The result was a rush on industrial properties as companies sought to expand their distribution

Buss and Likewise Partners were not the only ones to tap in to the surging market. Josh Buddish, another industry veteran with two decades of experience in the commercial real estate market, launched Endeavor Development in January to capitalize on the growth.

Endeavor is set to break ground on three industrial infill projects this spring, and is looking to develop projects across the Twin Cities metro area, such as the southwest and Midway areas, as well as undeveloped, but expanding, sites such as Lakeville in the south, Dayton to the northwest, and Woodbury to the east.

One such property is already in the planning phase, as Endeavor Development and McGlynn Partners have submitted their plans to replace the AMF Earle Brown Lanes, a vacant bowling alley, with a 63,780-square-foot building that would host warehouse and industrial tenants

The growth is happening throughout the city, however, from the industrial areas on the outskirts of the metro area, such as the manufacturing hotspot Brooklyn Park and Cretex Companies’ new medical manufacturing site, to the St. Paul riverfront and Alter Logistics’ $20 million shipping terminal expansion.

The new medical manufacturing site will be at the junction of highways I-610 and I-169. The facility will consolidate operations between two smaller facilities in Anoka, spokesperson Anja White told the Twin Cities Business Journal.

The port expansion, centered in the heart of the city on the St. Paul riverfront as opposed to the more peripheral Brooklyn Park, calls for Alter to relocate its decades-old metal-recycling operation to make room for a new fertilizer and trans-load facility. The upgrade would allow for direct barge-to-rail loading and unloading capabilities that would see an increase in volume by about one-third, loading or unloading an additional 300,000 to 400,000 short tons each year. One barge carries about 1.5 short tons of freight.

“So we’re talking about a couple more hundred barges in and out during barge season than we currently have,” Project Manager Ava Langston-Kenney said to the Twin Cities Business Journal. The estimated economic impact is forecast to be between $3.8 to $5.1 million annually, once the project is complete.

“What it does is it spurs economic vitality. The more tonnage coming over the wall, it spurs a lot of associated jobs of moving that tonnage from the Mississippi River to its final destination,” she said.

For Steve Buss and Likewise Partners, that spells opportunity. “Everybody is under pressure to get goods to their end customers faster,” Buss told the Twin Cities Business Journal .