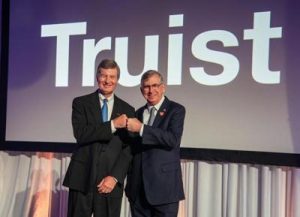 2 min read December 2019 — The banking industry welcomed the nation’s sixth-largest commercial bank earlier this month as regulatory authorities completed the merger between BB&T and SunTrust banks, now officially known as the Truist Financial Corporation. The new bank will be headquartered in Charlotte, North Carolina, while Atlanta retains its corporate and investment banking division. The conversion to the Truist brand will be phased out over two years as systems are integrated and will serve approximately 10 million U.S consumer households and businesses. The Truist brand will keep its predecessors’ philanthropic culture by contributing close to $100 million annually to various metro Atlanta community organizations over the next three years.

“This is a historic moment for Truist – a financial services organization created from two companies with shared values and a deep commitment to building a better future for our clients and communities,” said former BB&T Corporation CEO and Truist Chairman Kelly King in a press release. “The completion of this merger of equals is a tremendous achievement and a testament to the thousands of Truist teammates who have diligently worked to ensure its timely conclusion.”

Truist will have the largest market share of any bank in metro Atlanta and will rank as one of the leading commercial banks in most of the major markets in its territory. Prior to the merger, SunTrust had been Georgia’s largest bank. “We have much work ahead of us, but we’re well-positioned to create meaningful change for the clients we serve and the communities where we live and work,” said former SunTrust CEO and Truist President William Rogers in a press release.

To that end, its leaders announced a $60 billion community benefits plan in July earmarked for lending or investment in low- and moderate-income communities from 2020–2022. The commitment includes monies slated to help customers with home purchase mortgages and small business loans, as well as creating affordable housing developments and investments in local community redevelopment agencies across its markets.

Metro Atlanta can expect close to $100 million in community investments annually for the next three years. The community investments will support varying initiatives each year aimed at addressing the diverse needs of the region. Previously, SunTrust supported nonprofit organizations such as the Boys & Girls Club of Atlanta, YMCA of Metro Atlanta, as well as investing more than $10 million in Low-Income Housing Tax Credits to help construct 175 units of affordable senior housing in greater Atlanta, according to its website.

As for the Atlanta Braves’ newly built home, SunTrust Park will keep its namesake for now.  Much like the systems integrations, the rebranding efforts, including BB&T and SunTrust sports related facilities, could take close to two years to bear the Truist name, per different reports.

For now, clients can continue to use their perspective BB&T or SunTrust branches, websites, mobile apps, financial advisers and relationship managers, as well as use BB&T and SunTrust ATMs to make withdrawals without incurring out-of-network fees, Truist officials said.