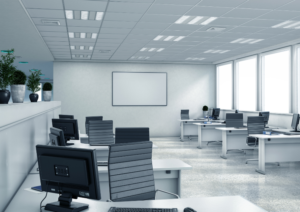 2 min read April 2021 — Is the office market in the Triangle primed for a comeback? Experts active in the Raleigh-Durham commercial market believe the answer is “yes.” They say the office market will not only come back, but do so with a vengeance.

Clay Grubb is CEO and founder of Grubb Properties, a full-service, vertically integrated real estate company with corporate offices in Charlotte, Cary, Winston-Salem and Atlanta. He is bullish on the Southeast, and its office market particularly.

“Anybody who thinks that the fundamental use of office space has dramatically changed is kidding themselves,” said Grubb in an interview with Invest:. “At the end of the day, most folks are anxious to get back and see their colleagues and experience the water-cooler conversations that you can’t get when you’re at home alone. I do think there’ll be more flexible opportunities available, but we’re quite bullish on the future of office spaces.”

Grubb has turned words into actions. At the end of 2020, Grubb Properties signed the second-largest lease in its history: a 200,000-plus-square-foot, 15-year contract.

“Great companies are going to have great office space. The mom-and-pops that have four or five employees and 1,500 square feet might not need office space,” said Grubb. “But larger corporations, anybody who relies on teams, are going to need space.”

Nineteen-story 301 Hillsborough in Downtown Raleigh is gearing up for an opening at the end of 2021. The building has 250,000 square feet of space; only one tenant, Raleigh tech firm Pendo, has signed on so far, nabbing five stories. Fallon Company Managing Director Zac Vuncannon said that he thinks the timing will be right to coincide with the sluggish market’s resurgence. “Our timing is great to capitalize on the renewed sense of enthusiasm,” Vuncannon said to the Triangle Business Journal.

Vuncannon noted that while the way people attend the office will be different, he is focusing his energy on longer term leases. The office space plans to accommodate that new wave of office life with 12,000 square feet of restaurant and commercial space, a fitness center and an outdoor deck.

“I think people will come to the office like it’s a business trip. They’ll be coming in with a plan of exactly what they want to get done,” said Vuncannon. “If we were willing to do three-year leases, we could do that, but we’re thinking more of the seven to 10 years.”

Currently though, the office market has yet to rebound from its 2020 pitfall. Absorption is negative and vacancy remains in the teens. JLL reported a vacancy rate of 14.1% last quarter, two points higher than the third quarter. Optimism prevails, however, for JLL Director of Research Brian Landes, with brokers in conversation with tenants about expansion. The Triangle’s booming tech industry will aid the rebound.

“The return to office isn’t an ‘if’ but rather a ‘when,’” said Landes to the Triangle Business Journal. “We’re seeing a lot more activity from occupiers returning later this year. The market has been relatively steady; the tech market has been a bit less hit.”