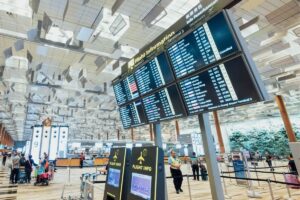 2 min read June 2021 — Whether traveling in or out of Tampa Bay this summer, Tampa International Airport (TPA) is making sure it’s ready for the onslaught of arrivals and departures. The airport has made the most of the pandemic by advancing its construction projects and getting ahead on other key projects while airlines have also announced the debut of new routes.

The projects nearing their completion include a new Taxiway A Bridge, a utilities-control plant and the new office tower and atrium property called SkyCenter One, the very same that Tampa International Airport CEO Joseph Lopano mentioned when he spoke to Invest: in December 2020. “The silver lining in all of this is we were able to accelerate some essential projects, especially those that were roadway-related. One such project is our main terminal curbside expansion, which will now include express curbs. Then we have our Central Utility Plant and our SkyCenter office building. We have been able to keep those projects on schedule. In parallel, all of our contractors operated in a safe environment. We’re elated with what we could do in this terrible time.”

Among its projects, SkyCenter One stands out as the brain and heart of the Hillsborough County Aviation Authority and TPA’s operations. The new office building is nine stories of glass and steel, totaling 272,000 square feet that includes a conference center, fitness center, cafe, and a variety of trails.

“The fact that you can do work in the morning, leave your office at noon, have dinner in Chicago with a client and be back in your office the next day without ever moving your car, without ever driving in traffic is a unique kind of experience. There are only a few office complexes around the world where you can say that is the case. It’s a unique property,” Lopano told Invest:.

Airlines like United and Spirit Airlines have also made more of an investment in TPA with their recently announced new routes to the airport, including United’s second daily flight from San Francisco and Spirit Airlines’ addition of four new routes from New Hampshire’s Boston-Manchester Regional Airport to Florida destinations such as Tampa Bay.

The timing of these new route announcements works in favor of the airport as travel slowly and steadily increases and is expected to approach pre-pandemic highs as the Fourth of July weekend approaches. During this time, air travel is expected to have increased demand, with around 3.5 million Americans planning to fly. Air travel volume is expected to reach 90% of pre-pandemic levels over the holiday weekend.

Between the soon-to-be-completed projects and the announcement of new routes from airlines, it seems that travel is coming back stronger – and quicker – than anticipated to TPA. Other parts of the greater Tampa Bay area have already recovered and exceeded pre-pandemic tourism activity, and it shouldn’t be long before the rest of Tampa Bay and Florida follow suit. When it does, Tampa International Airport will be ready.

Photo by CHUTTERSNAP on Unsplash