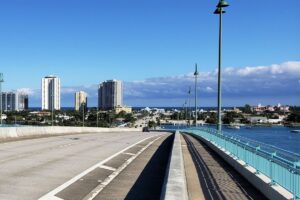 2 min read September 2021 — South Florida is growing more populated by the day. According to move.orgopens VIDEO file , Florida was the top destination for relocating Americans in 2020. As a result, the need for greater infrastructure in Florida is becoming more pressing. Major projects underway in South Florida are sure to accelerate the transportation outlook in the state for decades to come.

Even before COVID-19, residents were moving to Florida in droves to enjoy lower taxes, more space and sunshine. Florida’s Office of Economic and Demographic Researchopens PDF file said that between April 1, 2019 and 2020, the state added 387,479 residents, up 1.83% on the year before. For the year to April 2021, it estimates 329,717 new residents arrived in the state. Additionally, population growth is expected to average 845 new residents per day between 2021 and 2025, representing a compound growth rate of 1.39%opens PDF file over this five‐year time horizon, according to the Demographic Estimating Conference.

As a result of this influx in new residents, infrastructure is a major initiative in Florida and has become an immediate priority. Royal Palm Beach Village Mayor Fred Pinto, who leads the board of elected officials that advises the Palm Beach Transportation Planning Agency (TPA), said the growth in South Florida is “significantly increasing.” Additionally, he said as the market continues to be a seller’s market, he and other leaders are seeing more developers requesting residential land with implications for increased density and traffic.

In response to this rapid rate of growth, The Florida Department of Transportation is investing $1 billion in building express lanes from Broward County to Delray Beach. The tolled lanes will connect with the already established lanes in Miami. “Our roads are not as big as they need to be to support all the people who want to drive on them right now, but many of them are bigger than we want them to be to support the local character of our communities,” Nick Uhren, executive director of the Palm Beach Transportation Planning Agency, recently told Invest: Palm Beach. “We do have major capacity projects in the pipeline and underway. If you look at Palm Beach County, the widening of I-95 and the reconstruction of the Glades Road Interchange are going to be significant investments in mobility options for people who are driving. That will make a big difference, competitively speaking, for companies that are looking to relocate to Boca Raton.”

The Glades Road interchange will additionally be changed into a “diverging diamond shape” to allow for safer and easier turns on I-95. These two projects, which will cost $148 million, are expected to be finished by the end of 2023.

The Governing Board of Miami-Dade’s Transportation Planning Organization also recently voted to approve a $345 million commuter rail option planned for the Northeast Corridor of Miami-Dade County.  The commuter trains are scheduled to operate on the Brightline train tracks as part of the Strategic Miami Area Rail Transit, known as the “SMART” Plan. Brightline’s new rail would include a commuter service with five stops between Miami and Aventura, where a Brightline station is in the early stages of construction.

Throughout the pandemic, Brightline has continued its operations on a 170 mile project that will take passengers from Miami to Orlando International Airport. Additionally, it is constructing a new station in Boca Raton and at PortMiami, where it intends to help revive a cruise line industry that has been significantly challenged throughout the pandemic. Brightline paused its service and operations at the beginning of the pandemic in March 2020 but continued construction for its planned expansion from South Florida to Orlando and its theme parks. The route is expected to open in late 2022 or early 2023.