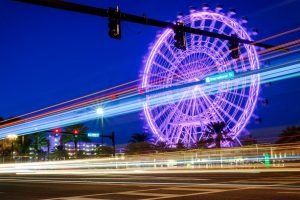 2 min read February 2020 — Orlando’s tourism industry is going from strength to strength, generating $75.2 billion from 75 million people in 2018. The industry’s success at drawing in new customers benefits almost every other industry in the region, not least aviation. In 2019, Orlando International Airport experienced a record-breaking year, welcoming 50.6 million passengers – a 6.1% increase on the previous year.

“Orlando lnternational’s growth in 2019 is due to a combination of factors,” said Phil Brown, CEO of the Greater Orlando Aviation Authority (GOAA) in a press release. “A strong Central Florida economy, continued innovative attractions being unveiled by the local theme parks, increased air service to new markets around the world and more seats coming into the area all equal record traffic at MCO.”

“Florida is very important to Spirit Airlines, and we are going to keep growing in the state we call home,” said John Kirby, Vice President of Network Planning for Spirit, in a statement. “As the only major airline headquartered in the Sunshine State, Spirit Airlines continues to add new destinations and more nonstop service to meet the needs of Florida’s growing economy.”

And 2020 is shaping up to be an equally exciting year. According to GOAA, there will be 39 new destinations launched from airlines including Air Canada, Westjet, JetBlue, Emirates, Delta and Virgin Atlantic over the course of the year.

The first half of 2020 is full of exciting new attractions such as Mickey and Minnie’s Runaway Railway at Disney’s Hollywood Studios and Hagrid’s Magical Creatures Motorbike Adventure at the Wizarding World of Harry Potter. Cirque du Soleil is also stopping by to perform Drawn to Life, which is sure to make 2020 a year to compete with its predecessor.

And Universal Orlando Resort is planning a new theme park resort, plunging billions of dollars into 700 acres on Universal Boulevard for its Epic Universe. The park is set to integrate the traditional theme parks and rides, as well as hotels, restaurants and other entertainment facilities. “Our vision for Epic Universe will build on everything we have done and become the most immersive and innovative theme park we have ever created. It is an investment in our business, industry, team members and our community,” said Universal Parks & Resorts Chairman and CEO Tom Williams at the unveiling of the project last August.

Orlando International is growing to accommodate this influx of tourists, with $4 billion in construction projects in the pipeline. The new $2.1 billion South Terminal is now 45% complete, will add 19 gates and is scheduled to open by 2021.