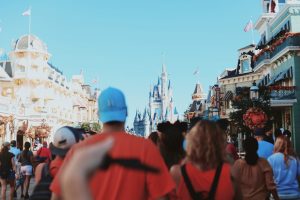 2 min read July 2020 — It has been almost six months since the World Health Organization declared the novel coronavirus a pandemic. Within days, each sector of the economy had to discover new ways to keep businesses afloat despite being forced to close their doors. Unlike banking and technology, tourism relies on almost every aspect of life that is now restricted, like travel and face-to-face interaction. For cities like Orlando, tourism is a major factor in the economy, to the tune of $75 billion a year.

Tourism supports an estimated 41% of Orlando’s workforce. Around 463,000 jobs have been affected and millions of dollars worth of wages are being lost each day during the area’s local tourism shut down. Tourism also accounts for $5.8 billion in state and local taxes, finances which go to support local schools, roads and other crucial services, according to Visit Orlando. The city’s resilience, however, is proving that it is not going to let a microscopic organism bring it down as tourism continues to push forward.

Although the hotel industry has been wrestling with obstacles caused by COVID-19, activity in that area is starting to gain traction again. One example is the development of a five-star convention hotel that was recently announced. Summa Development Group LLC has proposed a 33-story project in Thornton Park and the construction is expected to begin sometime next year, according to Orlando Business Journal. As for the big players like Walt Disney World, SeaWorld and Universal Studios, they too have begun to jump-start their operations. Disney’s Hollywood Studios and Epcot officially opened on July 15. Universal Studios welcomed guests back to its park on June 5, after almost two and a half months of closure. Of course, the theme parks will each have their own updated operational guidelines, including mandatory face coverings, temperature checks and social distancing regulations.

“When we first made the decision in March 2020 to close Universal Orlando Resort in response to the coronavirus pandemic, we didn’t know how long it would be for. We didn’t know what the future held or what a reopening would entail … Getting us here has been an in-depth process, and I am incredibly proud of the ways our Team Members have listened to experts and implemented new operational guidelines for the safety of our guests. At Universal Orlando Resort, we are following what we’re calling the three Ss. That’s screening, meaning we’re taking everybody’s temperature before they enter; sanitization, because we are constantly sanitizing areas and high-touch surfaces in the parks; and spacing, providing markings and reminders throughout our resort so guests can socially distance themselves from other parties,” said Bill Davis, president of Universal Orlando Resort, in a welcome back letter.

It’s safe to say that tourism is the bloodline of Orlando’s economy. While there is hope for a new beginning and a new normal after the pandemic, the city isn’t in the clear just yet. Despite every attempt by public officials to stop the spread of the novel coronavirus, cases continue to surge and hospitals are starting to fill up. On July 19, Florida reported 10,328 new positive COVID-19 cases and 90 Florida resident deaths related to COVID-19. Orlando has been listed as the second highest city, behind Miami, with the most confirmed number of COVID-19 cases, according to The Florida Department of Health.