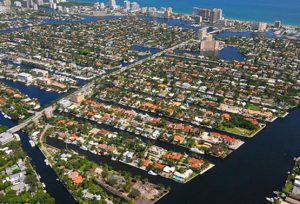 2 min read July 2019 — The growth of the Fort Lauderdale area is a true testament to the collaborative efforts of the city’s private and public sectors. The positive effects of this growth can be witnessed in the development, redevelopment and preservation of the city’s neighborhoods.

Victoria Park: A beautiful mix of traditional “Florida” homes and new development, Victoria Park has long been a staple neighborhood in Fort Lauderdale. The revitalization of the area is thanks to its close proximity to Fort Lauderdale Beach, Las Olas Boulevard and cultural centers like the Broward Center for the Performing Arts.

Invest: Greater Fort Lauderdale spoke with Doron Broman, managing partner of Moderno Development Group, about its investment in the development within Victoria Park. “We are tapping into the near downtown areas because more people are seeking to live in more walkable areas, where they need to spend less time commuting to work and experience a more urban lifestyle,” Broman said. “We are building very modern, urban townhouse rental communities in trendy Victoria Park.”

Tarpon River District: Located just north of Davie Boulevard and west of Andrews Avenue, Tarpon River District is a neighborhood whose appeal is thanks to its proximity to downtown Fort Lauderdale and emphasis on family life. With a recent influx of mixed-income homes and apartments, access to some of the cities best parks and the locally famous Tarpon River Brewing company, this neighborhood will continue to be a top choice of young families.

“We are keen on Tarpon River District, which we believe is the new cool work-live-play hub, located right in the center of Fort Lauderdale,” Broman told Invest:.

Flagler Village: Twenty years ago, this neighborhood was a rundown warehouse and residential district. Today, Flagler Village is one of the trendiest areas in Fort Lauderdale. The collaboration between artists and developers has transformed the neighborhood into a premier arts district with offerings of luxury rental apartments, restaurants and arts and culture. The Village is also home to the Brightline train station, which supplies a steady flow of traffic into the neighborhood daily.

Las Olas Isles: Due to its proximity to Las Olas Boulevard and Fort Lauderdale Beach, Las Olas Isles is the perfect mix of retail, restaurants and a coastal lifestyle. Luxury living like this comes with a hefty price tag. Homes in the area range from $1 million to $40 million and rental units are in the thousands.

Colee Hammock: Not only is this one of the oldest neighborhoods in Fort Lauderdale, it is also one of the most diverse and eco-conscious in the city. Situated next to the Intercoastal Highway and the New River, Colee Hammock offers residents a wide variety of homes and walkability to theaters, restaurants, retail and entertainment venues. This eclectic neighborhood is home to a wide demographic, from the working class to the wealthy.

Invest: Greater Fort Lauderdale discussed development in Colee Hammock with Andrew Verzura, principal of VCM Builders, Inc. “We are working on a residential project in Colee Hammock, a historic neighborhood in Fort Lauderdale established in 1913. We are constructing a home that is being built around some of the area’s oldest and mature foliage. This is a neighborhood that has a special relationship and respect for the nature within it.”