The Wait Is Over

The Wait Is Over 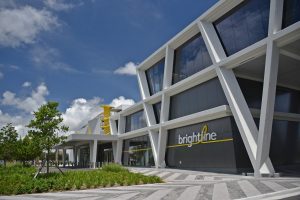 January 2018 — After much anticipation and a few delays, Brightline finally began its introductory service this past Saturday between Fort Lauderdale and West Palm Beach.

While Saturday’s rides were described as smooth, fast and comfortable by many excited passengers, the celebrations were dimmed by an unfortunate tragedy. During preview runs the night before, a 32-year-old woman was struck and killed by a northbound train when she ducked under the already lowered gates and tried to cross the tracks. Despite this dark cloud, riders are optimistic about the new service.

As the only privately owned, operated and maintained passenger rail system in the U.S., the Brightline train offers an unparalleled travel experience in South Florida. All passengers have access to free wifi, outlets and USB jacks while onboard.

A one-way ticket between Fort Lauderdale and West Palm Beach is $10 for its select service and $15 for its smart service. Seniors, active military and veterans receive a 10-percent discount, while children under 12 get a 50-percent discount. Trains will depart from 6:00 a.m. to 11:00 p.m. every day, and the high-speed train makes the trip in about 40 minutes.

The Brightline service to Miami is expected to open in the coming months, and an opening date for the Orlando station has not yet been set.

For more information or to book a ride, visit https://gobrightline.com/.