The sun rises on Sunset Lounge

The sun rises on Sunset Lounge 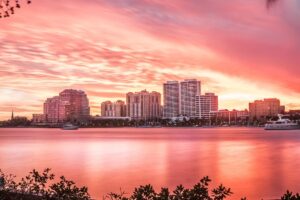 2 min read April 2022— West Palm Beach’s historic Sunset Lounge is being brought back to life as the city begins searching for a venue operator.

Having hosted the likes of Count Basie, Ella Fitzgerald, Louis Armstrong, Ike and Tina Turner, Duke Ellington and Nat King Cole, the historic Sunset Lounge was the premier African American  entertainment venue of the South for over a generation. Its doors will soon open again. West Palm Beach announced last week that the city is searching for an operator that will develop and implement event programming, book entertainment and manage food and beverage operations for the restaurant and bars on the site. The venue is being renovated and brought back through a $12.5 million renovation led by the city’s Community Redevelopment Agency (CRA).

The renovation will include a complete rehabilitation of the existing 12,308-square-foot building. The first floor will feature a renovated bar and new full-service restaurant, while the second floor will be converted back to a ballroom with its own stage. The mezzanine will be found on the third floor. A new two story 7,200-square-foot tower with a roof garden east of the current building will also be built, including the restaurant kitchen, bathrooms, performer dressing rooms, a lobby, office space and a box office, as well as a broadcast facility. Parking will be included in the rear in addition to the valet service at the front of the building’s gathering plaza. The renovation will also include a rooftop bar and patio for patrons.

Located on the corner of Eighth street and Henrietta Avenue in West Palm Beach’s predominantly African American Northwest District, the club was the cultural equator of the community throughout its glory days from the ‘40s to the ‘70s, said retired teacher and former city commissioner Isaac Robinson Jr. with WLRN.

The CRA anticipates the completion of the historic restoration by winter of this year. West Palm Beach-based design firm V Starr, owned by world-renowned tennis player Venus Williams, is overseeing the design of the project.

“The renovated Sunset Lounge will honor and celebrate the rich African American and music histories of our city,” said Mayor Keith A. James in last week’s press release. “As a future cultural destination, it will add to the vibrancy of the Historic Northwest. With completion of the project now in its final phases, I couldn’t be more excited about the future of the Sunset Lounge and our city.”

The renovation of Sunset Lounge is part of the broader effort underway to revitalize the artistic roots of the community and establish long-term economic viability. Across the street from the lounge lies Heart & Soul Park, with musical instruments installed across the grounds and historic mosaics paying tribute to notable local leaders and artists, such as civil rights leader Alice F. Mickens. Further south on Seventh street, between Rosemary Avenue and Sapodilla Avenue, lies the recently constructed, mixed-use Styx Promenade, a development that evokes the shotgun-style houses of the area’s past.

Interested operators will have until May 11, 2022 to submit their proposal to CRA for Sunset Lounge.