The show goes on for Wellington’s winter equestrian season

The show goes on for Wellington’s winter equestrian season 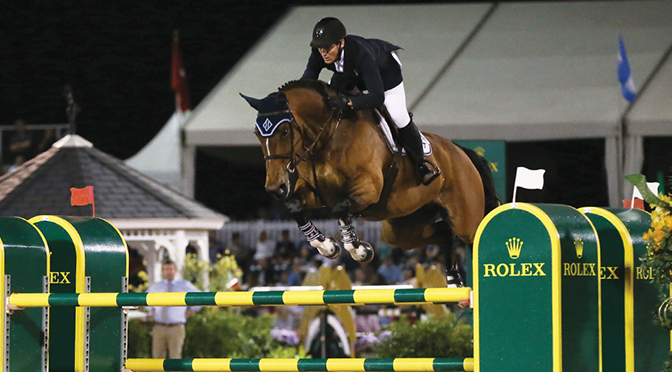 2 min read November 2020 — The show goes on for Wellington’s winter equestrian season as organizers and competitors jump over the pandemic-related hurdles to ensure the safety and well-being of competitors, staff and the local community. Restrictions such as facemasks, social distancing and no spectators during competitions will be commonplace as riders from all over the world gallop to Palm Beach County’s horse country for the equestrian season.

Equestrian Sports Productions President Michael Stone has been preparing for the winter season for the better half of this year. Stone helped craft the extensive 40-page guideline to ensure the competitions keep going without interruption while also protecting the local community.

“We had a mask mandate before everybody had a mask mandate, we have thermal imaging cameras to take pictures of people as they come to the show grounds and we have a strict protocol where people who report sick are sent home,” Stone told Invest: Palm Beach. “We’ve been able to create standards that are used both here and around the world. I have contacts with the leaders of the sport around the world, so we worked together with the international federations and the chief medical officer to come up with these protocols, which were really successful.”

The Village of Wellington is a growing area in Palm Beach County boasting more than 65,000 residents, according to the U.S Census Bureau. While Wellington has made strides to diversify its tax base and bring in new business opportunities, the equestrian sector remains a big draw for the village.

“We’ve grown from a pretty small, insular operation, basically catering to the rich and famous coming to Wellington, who didn’t want it to be bigger than it was because it was private. We’ve turned that around, with prize money of about $3.4 million when I arrived, to now over $13 million,” Stone, whose organization runs the Palm Beach International Equestrian Center, said. “ By doing that, we’ve been able to heavily invest in the infrastructure of the horse show, which in turn has increased the number of people that come.”

And while this year, the competitions will be hosted without spectators, Stone has used this time to make serious improvements to the facilities.

“We spent over $1 million in three new arenas. We spent $1.4 million last year on our international arena, and we’ve invested another $1.2 million doing more rings. We want to do more, but, with this economy, nobody really knows what’s going to happen. If the pandemic came back with a vengeance, we could get shut down again, and we want to be able to keep going and not spend all of our reserves in one hit. So, we are doing it judiciously.”

Participating in the competitions is a huge undertaking and Wellington is a major destination for the sport during the fall and winter months. “The way horse shows are structured around the world is they are generally a week, which involves a lot of travel as people are moving their horses and businesses around. In the winter time, they basically all come here,” Stone said. “Now with COVID, we had a huge influx of Europeans this year that had probably never come before, and most of those who come tend to stay because the weather is better, the prize money is really good and conditions are wonderful.”