The rise of the Magic City as a tech hub

The rise of the Magic City as a tech hub 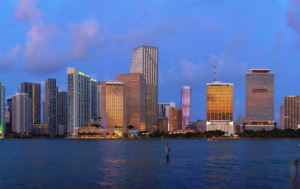 2 min read March 2021 — Is the Magic City evolving into a national magnet for technology companies and investors? All signs point to a resounding yes.

What was once a brewing tech scene in Miami and South Florida is now a piping hot phenomenon years in the making, drawing in new and veteran players that range from cryptocurrency experts to investors in some of the world’s most innovative companies.

The newest name of the venue where the Miami Heat play is an example of both the growth and potential of digital currencies, as well as the influence the Miami market has on tech-based companies and investors.

This week, the Miami-Dade County Commission approved a tentative deal with FTX, a global cryptocurrency exchange, to buy the naming rights for the Miami Heat’s formerly-known American Airlines Arena for $135 million, according to different reports. The agreement marks the cryptocurrency industry’s first foray into a major U.S arena sponsorship and helps fuel Miami’s rebranding efforts as a tech hub.

Besides this key marketing effort, a series of major venture capital and private equity firms are settling in Miami.

In January, Blackstone (NYSE:BX), a global investment firm, signed a 41,000-square-foot lease at 2 MiamiCentral in Downtown Miami. Blackstone looks to expand the firm’s in-house technology capabilities with plans to hire more than 200 tech-focused employees in Miami in the coming years. The group has subsequently purchased two other class-AA buildings since the start of 2021.

“Miami is a vibrant city with a pipeline of top technology talent available from best-in-class university programs, as well as an experienced workforce that will enable us to diversify our talent pool and grow our technology team,” Blackstone’s Chief Technology Officer John Stecher said in a statement.

This technology-related economic boom has been brewing for over the last decade, experts say. “Ten years ago, the tech culture was minute, almost wholly off the radar and totally diffuse. Investors would see that and wouldn’t be motivated to come down here. Now, it’s a different story,” Greater Miami Chamber of Commerce President and CEO Alfred Sanchez told Invest:. “There are more tech companies; the critical mass is growing and they’re more concentrated. I think investors see that. Now, something is shifting: for many decades, the investor in South Florida was a real estate investor but now the tech investors — a different animal — are here, they’re hunting for good opportunities and they see a reason that makes South Florida worth their time. This is wonderful.”

This week, Founders Fund, the multibillion-dollar venture capital firm responsible for the success of everyday-use favorites such as Facebook, Spotify, Lyft and Postmates, among many others, announced it had signed a multi year lease in Wynwood, the Miami Herald reported. Complementary venture capital and startup Atomic, and OpenStore, a new company led by Founders Fund, also signed leases in the desirable district, the newspaper reported. Led by Peter Theil, PayPal co-founder and the first outside investor in Facebook, Founders Fund and Atomic mark the latest venture capital firms to settle in the Magic City.

“Miami is the perfect city to start the next generation of technology companies, such as OpenStore. It’s incredibly diverse with amazing entrepreneurial talent, and Atomic plans to invest and scale significantly here,” Atomic CEO and Managing Partner Jack Abraham said in statement to the Miami Herald.

Miami leaders echo these sentiments. Miami Mayor Francis Suarez has personally taken on the task of wooing tech-based leaders to the Magic City. He has been busy in the Twitterverse personally reaching out to industry leaders and actively advocating for Miami’s tech community, according to different reports. Most notably, Suarez has been in conversation with business magnate Elon Musk to explore the possibilities of creating underground tunnels in Miami.

“The signing of leases by Founders Fund, Atomic and OpenStore in Wynwood is proof that Miami is well on the way to becoming the capitol of capital,” Mayor Suarez told the Miami Herald “I am excited about all of the opportunities for impact that will be unlocked for founders, job seekers and innovators as a result of the arrival of these iconic firms to Miami.”