The Queen City gears up for a strong event season

The Queen City gears up for a strong event season 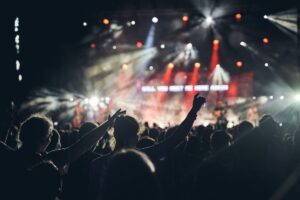 2 min read June 2021 — From hosting a music legend on his farewell tour to rock, country and Latin American music stars, Charlotte’s travel and hospitality sector is ready to stop singing the blues as it prepares to host some of music’s biggest acts in the coming months and in 2022. After a disruptive cycle, the Queen City is lining up an impressive list of performances at Bank of America Stadium and the Spectrum Center.

Much to the fanfare of his fans, legendary rockstar Elton John announced this week his Farewell Yellow Brick Road will make a stop in Charlotte in September 2022. Bank of America Stadium will be the backdrop to what is slated to be a performance for the ages. “I’m going to go out in the biggest possible way, performing at my very best, with the most spectacular production I’ve ever had,” the hitmaker said as he announced the 30-date tour. “I can’t wait to see you all on the road one last time.”

Elton John’s farewell tour is the latest in a series of highly anticipated events at Bank of America Stadium, including upcoming concerts by Garth Brooks and Billy Joel, both of which are set to perform in April and September of next year respectively. Rescheduled by the coronavirus pandemic, tickets to see Brooks in concert sold out in 90 minutes, Bank of America Stadium reported. 74,000 fans are expected to turn out for the country star, making it the largest paid crowd in the history of the stadium.

The Bank of America Stadium concert series has been a long time coming. Maximizing the use of the stadium during the football off-season has been a key priority of Panthers Owner David Tepper and his company Tepper Sports & Entertainment. The concerts were expected to take off last summer with acts such as Brooks, Joel, and the Rolling Stones before COVID-19 made its way stateside. High quality of life options such as entertainment and sport events play a role in economic development decisions, Tepper Sports & Entertainment President Tom Glick told Invest: prior to the pandemic in January of 2020. “Companies that are making decisions to relocate and expand are concerned with aspects like cost of living, school districts, and leisure activities available for their employees and families. For the people who live here and make their life in the area, sports, arts and entertainment are incredibly important.  As a result, Bank of America Stadium is now hosting concerts, which it had not done before,” he said at the time. “The right type of attractions and events will bring people from all over the country and the world to the Charlotte area, which drives tourism, hotel stays and visitor spending. This is a benefit of having different sports and entertainment events in Charlotte,” Glick said.

Minutes away from the stadium, the Spectrum Center is also gearing up for a strong event season. Acts such as Michael Bublé to Marc Anthony to fan favorite sporting events such as the WWE Supershow and the Harlem Globetrotters are expected to satisfy the pent-up demand for entertainment and sporting events. Favorites among the millennials and Gen-Z such as Billie Eilish and Bad Bunny are scheduled to come to the Queen City in the spring of 2022.

Photo by Joshua Humpfer on Unsplash