The path forward for a struggling Port Canaveral

The path forward for a struggling Port Canaveral 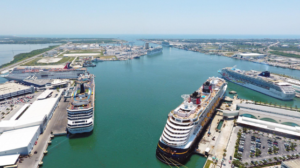 2 min read February 2021 — PortCanaveral has been brought to its knees by the pandemic and there continues to be uncertainty regarding when the port’s all-important cruise activity will be revived. If some experts are right, passengers could return by the end of the year, bringing with them hope of brighter days for the industry and the port.

As the second-busiest cruise port in the world for multi day embarkations, Port Canaveral generated $1.94 billionopens PDF file in direct expenditures for the Central Florida economy in 2018. These expenditures created direct employment for more than 17,200 workers, who received a combined $729.4 million in wages and resulted in tens of millions of dollars in tax revenues.

Seventy-eight percentopens PDF file of Port Canaveral’s revenues come from the cruise industry. In other words, the port has wholly lost its most significant source of revenue for the time being, although it has been able to stay afloat with help from the 22% of its revenues that aren’t cruise-based. The port has even been expanding its cargo operations. However, the cruise industry itself doesn’t have that same luxury.

From Q2 to Q4 of 2020, international cruise line Carnival Corporation incurred a GAAP net loss of $9.5 billion. For comparison, the company earned a GAAP net income of $2.7 billion over the same timeframe in 2019. However, CFO David Bernstein stated the corporation has, “liquidity in place to sustain ourselves throughout 2021, even in a zero-revenue environment.” The question is how will cruise lines survive if their inability to serve passengers extends beyond 2021.

According to Patrick Scholes, analyst for Truist Securities, it’s likely that the cruise industry will see a return of revenue-generating passengers by the end of the year. He sees July as the best case for a restart, but also acknowledges the possibility that cruises may not be available until early 2022.

During the 2020 State of the Port Presentation, Port Canaveral’s CEO John Murray explained the process of reopening cruise lines. First, all cruises must have onboard testing facilities for COVID-19, testing passengers both before and after they are on the ship. Second, before cruises can have any revenue-generating guests, they must have a simulated cruise with volunteers to ensure that the cruise can meet CDC guidelines. Finally, all cruises leaving the port will initially be restricted to 50% capacity, and the length of the cruises will be restricted to a maximum of seven days.

Numerous Central Florida industries, such as transportation, accommodation, retail trade and food and beverage, have been dramatically impacted by the loss of the cruise industry. Government relief has done a tremendous job at supporting company balance sheets, with bankruptcies in Central Florida falling 43% year over year in the January to October period, but the bleeding continues to seep through the bandaids.

Although the cruise industry may be forever changed, by 2022 a revival of the industry and consequently Port Canaveral would help Central Florida significantly in its recovery efforts, bringing with it economic activity, jobs and tax revenues.