The office market of the future

The office market of the future 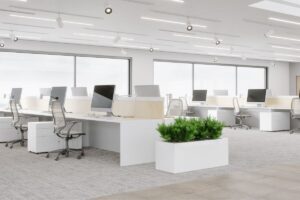 2 min read December 2021 — As companies rethink their office spaces, they are also re-evaluating where their employees want to work and what housing, amenities and services are available and convenient to their location. This bodes well for San Antonio’s office market which was recently ranked as one of the Top 10 strongest office markets in the U.S. by the National Association of Realtors.

It only takes one look at the skyline to realize that in San Antonio there are far fewer skyscrapers and far smaller office buildings than other metro areas. In fact, the city has only two buildings that measure more than 500 feet tall – the Tower of the Americas at 623 feet and the Marriott Rivercenter at 544 feet. Compare this to New York City with its 274 skyscrapers exceeding 500 feet in height, and San Antonio becomes a much more boutique metro area.

And that is just how they like it, according to Carolyn Shaw, executive managing director and partner of Stream Realty Partners. “San Antonio is a smaller office market than most major cities, but it is also a small-tenant market. Just over sixty percent of companies in San Antonio have fewer than 10 employees,” she told Invest:, adding that most of the company’s deals are under 5,000 square feet.

Jonathan Collins, managing director of Valcor Commercial Real Estate, also remarked to Invest: that this is making companies like his double down on their already strong boutique office focus. “COVID raised a lot of questions as to the long-term validity of office space, but we believe it actually solidified the need and desire for the boutique office environment,” he said. “We once again believe that boutique office of up to four stories, ranging from 1,500 -15,000 square feet, is here to stay.”

According to a report by NAI Partners, San Antonio has avoided the glut of vacant office space that other markets have recently struggled with.

“We don’t have the large volume of new office projects recently completed or under construction in San Antonio that you might see in Austin or Dallas,” conceded Chuck King, managing director of JLL when speaking to Invest:. “However, of the over 1 million square feet of top-class A quality projects recently completed or near completion in the CBD and Lower Broadway/River North markets of the city, we are starting to see significant absorption.”

Location is another big selling point for companies to recruit talent, especially given the realization in the last year of just how much time is freed up in the absence of a commute. This is beneficial for San Antonio,  Clare Flesher, managing director for San Antonio at NAI Partners, told Invest:, because most of the office market is located in the west and northwest of the city, where there is currently a big boom in single family and multi-family construction. “Given the philosophy of changing and becoming more employee-centric, that area is a nice median for employers,” she added.

And more flexible options for employees means companies can get more creative with their spaces. “What we’re seeing now is that people are rethinking how they’re going to use their office space,” said Flesher. For example, many law firms have already removed law libraries and are now looking at eliminating document preparation areas and underused offices. There are also more subleases on the market, she added. Financial services firm USAA recently announced it would sublease parts of its downtown office on Convent Street as it re-evaluates its office needs.

Not only will smaller, more conveniently located offices be vital for San Antonio, but so will those with added perks, Carolyn Shaw told Invest:. This will mean amenitized offices will be critical in securing leases going forward. “With increasing workplace and space options, companies have to give employees a reason to want to come to the office,” she said. “At the end of the day, we are competing with the comforts of home.”