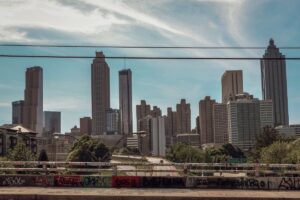 2 min read   2022— In what is shaping up to be a rematch of the 2018 race, Georgia Gov. Brian Kemp and his Democrat challenger, Stacey Abrams, will once again face off on election day. While Kemp remains the favorite, Abrams looks to close the gap ahead of Nov. 8.

With less than 100 days until the Midterm Elections, the race is anything but assured, with polls showing Kemp maintaining the lead, albeit a tenuous one, over Abrams. According to the Real Clear Politics polling average, Kemp maintains a 48.2% advantage over Abram’s 44%. One poll from Fox News taken between June 22 to 26 shows Kemp ahead by only three points, and a opens in a new windowQuinnipiac poll taken in June shows them tied.

This will be the first election cycle operating under the new regulations implemented by Georgia’s opens in a new windowcontroversial new election security law, which limits voter drop boxes to one for every 100,000 registered voters. The largest impact will be in the state’s most populous counties of Cobb, DeKalb, Fulton and Gwinnett Counties, which encompass the Atlanta Metropolitan Area and are limited to a opens in a new window total of 23 drop boxes.

opens in a new windowVoting has surged in Georgia this year, however, indicating that despite the new regulations, voters seem to be energized and ready to cast their ballots, with some considering splitting their ticket toward those who they believe most qualified on the issues as opposed to party loyalties, with the opens in a new windowAtlanta Journal Constitution reporting that it seems voters may be looking to split their tickets between Kemp for governor and Democrat Sen. Rev. Raphael Warnock for the Senate.

Nevertheless, there remains plenty of time for the gap to widen or close between Abrams and Kemp. The nationalization of politics will also play a role, with gun rights and abortion being key issues that, while not unique to Georgia, have a local impact. Earlier this week the Atlanta Midtown Music Festival, which has an opens in a new windowannual economic impact of $50 million, was canceled. Organizers cited state law that prevents them from barring firearms in public spaces like parks, where the festival is held. opens in a new windowGeorgia Democrats also see potential for increased voter turnout over abortion, citing the opens in a new window58% rejection of a Kansas amendment that would erase the state’s abortion protections and drawing parallels to Gov. Kemp’s own abortion ban.

While there remains plenty of time for campaign curveballs to hit either candidate, two televised debates scheduled for Oct. 17 and Oct. 30 will be key for the last leg of the campaign and provide the candidates their chance to give voters their final pitch as to why they should occupy the Governor’s Mansion. During the last cycle in 2018, then-Secretary of State Kemp opens in a new windowskipped the final debate against Abrams to campaign alongside Donald Trump; it seems unlikely that the governor can take such a risk now with the number of variables at play this season.

Regardless of who the winner may be, the 2022 rematch of Kemp and Abrams will help to settle the claim by Abrams that Kemp won the 2018 gubernatorial race with a margin of 1.4% due to the purging of voter rolls, with opens in a new windowAbrams never having since conceded the race.