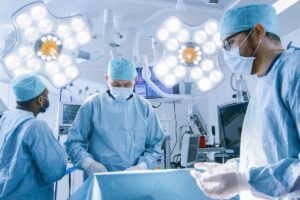 2 min read September 2021—The healthcare industry is evolving rapidly as a result of shifts in education, policy, society and technology. Robotic-assisted surgery is quickly emerging as the future of minimally-invasive surgery, and Atlanta is at the center of major developments in the segment.

In the past, those who were diagnosed with conditions requiring surgery were faced with limited options, including traditional surgery with significant and often painful recovery times. Recent developments in the robotics industry have established opportunities for laparoscopic, or minimally invasive, surgeries that require smaller incisions and less recovery time as a result.

Robotic-assisted surgery is an operation in which a surgeon sits at a table near the patient and operates through a small incision utilizing the robot’s instruments. The single-port da Vinci robot, made by Intuitive, is the first of its kind in the metro-Atlanta area and only the second in Georgia. It allows surgeons to perform complex, minimally invasive surgical procedures with both accuracy and precision. The da Vinci system translates every hand movement the surgeon makes in real time to bend and rotate the instruments with precision during the procedure. The surgeon also controls a camera to adequately view the surgical field, which is magnified with a high-definition 3-D view. The system was created and has been implemented in an effort to expand the surgeon’s capabilities and offer an option to open surgery.

Atlanta has multiple healthcare systems revolutionizing surgery by adopting robotic-assisted methods. Atlanta-based Emory Healthcare is a trailblazer and early adopter of the da Vinci system, launching its robotics program in 2002. Emory initially utilized the systems only for cardiac procedures, said Sherry Rogers, director of robotics for the health system. Emory’s robotics program has since evolved into a service line, offering robotic surgery options across seven specialties. All five hospitals within the Emory system offer robotic surgery and have 115 robotically trained surgeons across all the hospitals, conducting more than 3,000 da Vinci surgical procedures each year.

Scott Miller, M.D., urologist and medical director of the Advanced Laparoscopic and Robotic Surgery Program at Northside Hospital in Atlanta, performed the first robotic-assisted surgery at Northside Hospital. He has since helped expand Northside’s Robotic Surgery program across many different areas. “Many of my first surgeries using robotics were prostatectomies, but use of the da Vinci has expanded to other specialties including gynecology, GYN oncology, urology, general surgery and ENT,” said Miller in a Northside press release. “The opportunities this technology brings to the future are exciting.” In fact, Matt Beane, a professor of Technology Management at the University of California, Santa Barbara, says nanobots could soon act as autonomous surgical robots inside the human body, making traditional and minimally invasive surgery fully obsolete.

Although the demand for technology in healthcare has never been greater and the opportunity is tremendous, there is still a gap in the training systems set in place. According to a U.S. News and World Report article, “residency and fellowship programs will drive substantial change in robotic surgery training.” Dr. Ankit Patel, a general and gastrointestinal surgeon at Emory Healthcare, who helped build comprehensive robotic training guidelines for the Society of American Gastrointestinal and Endoscopic Surgeons (SAGES), programs and training initiatives have been expanding quickly across the country. “Robotics is the future of surgery,” he told U.S. News and World Report. “That’s why we’re working toward a unified, standardized training platform.”

Douglas Murphy, who trains cardiac surgeons and surgical teams at Emory St. Joseph’s and other hospitals in the U.S., Europe and Japan, says the opportunity for improved training and evolution for robotic-assisted surgery is trivial compared to breakthrough accomplishments that could help create for the healthcare industry. “All I know is, I’ve got patients coming in tomorrow who need help.” Sometimes he has to open them up, he says. “But if I can fix their hearts with the help of the robot and without splitting their sternum, I have created more value for the patients.”