The Future is Now for FATVillage

The Future is Now for FATVillage 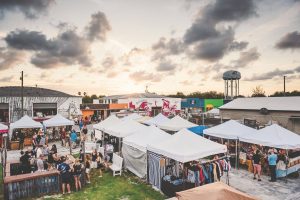 3 min read August 2019 — Fort Lauderdale’s FATVillage makes up for what it lacks in size with a treasure trove of arts, cultural and technological offerings. Founded in the late 1990s by Doug McCraw, the four-block historic warehouse district has developed into an arts hub to rival the most established arts districts in South Florida. While the area was originally founded as a way to rally philanthropic support around the artistic community in Fort Lauderdale, it is now transitioning into the premier destination for artists, small-business owners, technologists and arts enthusiasts.

The emergence of FATVillage has been a thoughtful and deliberate process of encouraging smart development that never diverts from the emphasis on art as the main part of the neighborhood’s DNA. This stands true for the introduction of more mixed-use development into the area, as McCraw highlighted in a recent interview with Invest: Greater Fort Lauderdale, discussing how that development is not only a new concept but also positively affecting the surrounding neighborhoods. “FATVillage has consistently been a significant economic driver in the Broward County region. It has acted not only as an arts community but also as a nucleus for a lot of the development in Flagler Village. What we are doing in terms of using art as a driver of mixed-use development is still a new concept, and not many developers are integrating product development with a creative community in the same way that we are,” McCraw told Invest.

He also acknowledged that while FATVillage is undergoing a transition to focus on developing its status as an economic driver in the region, the reason for the district’s success has been the deliberate and careful process of deciding who can lease inside the area. “FATVillage is at a transition point. We are very focused on developing FATVillage to make it a treasure for Fort Lauderdale. We have aggregated various types of coworking spaces with different disciplines, all of which are major components of FATVillage. We have a curated process and we do not just lease to the first person who walks in the door. Our focus on art as an integrated part of the DNA of FATVillage makes us a unique component of Fort Lauderdale’s culture,” McCraw said.

Helping to achieve this vision for the future of FATVillage, while also remaining true to its arts identity, is Urban Street Development, which has been involved with the district from the beginning. Invest: recently had a conversation with the Co-Founder Alan Hooper about what the next phase of development for FATVillage will look like. “In August, we intend to deliver a plan that will take the FATVillage Art District in downtown Fort Lauderdale into an exciting era that will combine food with art and technology (FAT) and develop a neighborhood where people and businesses of all sizes can find a place to live, create, collaborate, and socialize. The 5- acre-plus plan fully embraces the arts and elevates the opportunities for artists and creative businesses alike. Positioned inside the downtown core, the Opportunity Zone, and a block from Brightline, the options for community building are endless,” Hooper told Invest:. “We want to help FATVillage evolve into the place it should be. A place that is attractive to creative businesses while maintaining the artists who made us a well-known destination. We want to build some affordable housing for artists and local creative people, as well as really cool workspaces for start-up businesses that might represent art in another way, through video or audio, the art of the word, or the art of food. A place like this will be very attractive to businesses that benefit from hiring within a congregation of talent. In the end, we are creating a village that all people can grow with, be a part of and enjoy.”

Arts and culture is a major key in Florida’s economy, and even more so in Broward County. Areas like FATVillage play a vital role in keeping arts in the county, and acting as a significant economic driver for the region. FATVillage has long been an attractive destination in Fort Lauderdale, but it is now on the cusp of a major transition into a true arts and economic staple in Broward County.