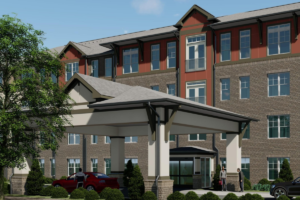 2 min read May 2021 — With a combination of low-income housing tax credits and HUD financing totaling $33 million, PNC Bank is again stepping up its support for Atlanta communities by helping fund a new apartment community for low- to moderate-income seniors in Sylvan Hills, part of a larger vision to transform the area.

Developed by The Benoit Group, the new $36 million, 183-unit Sylvan Hills Senior project will provide much-needed affordable housing options to seniors around the community, the first phase of a community development vision. The project’s construction recently started on seven acres that were formerly part of the Sylvan Circle Apartments site, a 38-building complex built in 1949. It was demolished in 2010.

“As housing prices in the city continue to outpace wages, developments like these will become increasingly important for seniors, particularly for residents with fixed incomes who are often priced out of metro Atlanta’s neighborhoods,” said Eddie Meyers, PNC regional president for Greater Georgia. “There’s a critical demand for quality, multifamily housing and Sylvan Hills provides a significant opportunity for PNC to invest in a community that will create and preserve long-term affordable housing near the Atlanta BeltLine.”

The Sylvan Hills Senior project will offer 127 one-bedroom units and 56 two-bedroom rental units to seniors earning between 50 and 60% of the area’s median income. “To revitalize underserved communities, we target the right capital sources and local community resources to create a higher quality lifestyle that encourages new investment in these neighborhoods,” The Benoit Group CEO and Founder Eddy Benoit said.

With a slated delivery date of late 2022, the three-story apartment complex will offer residents extensive amenities, and will be a key component of a grander Sylvan Hills community vision featuring retail space, mixed-income rental apartments and market-rate single-family homes. A $2.5 million investment from Invest Atlanta and an additional $20 million in tax-exempt bonds issued by the Georgia Housing and Finance Authority is helping fund the development.

The Sylvan Hills Senior project build’s on several recent efforts PNC has made to empower low to moderate-income consumers and under-resourced communities. In addition to a major investment in Atlanta-based Greenwood digital bank last month, PNC will soon launch its own digital bank offering to support underbanked customers. Rolling out nationwide in June, Virtual Wallet Low Cash Mode™ will give customers groundbreaking protection from excessive overdraft fees, which have ballooned to an estimated $17 billion a year.

“Low Cash Mode gives our customers the ability to avoid unnecessary overdraft fees. With this new tool, we’re able to shift away from the industry’s widely used overdraft approach, which we believe is unsustainable,” said William S. Demchak, PNC’s chairman, president and CEO. “Low Cash Mode is a great example of how advances in our technology allow us to better align with a core principle of supporting our customers’ financial well-being. This is the right move for our customers and the bank.”

Local community organizations and communities are also eligible to seek part of $1 billion PNC committed earlier this year to bolster equity, diversity and inclusion, and community empowerment efforts in several states, including Georgia. PNC’s Atlanta-based community development team is spearheading initiatives tied to the investment, which will pay for, among other things, financial education, consumer programs, and community-loan programs over a three-year period.

“While our commitment to low- and moderate-income communities is not new, we are now approaching this work with a more deliberate focus on racial equity and social justice. Through our work with the local business community, policymakers and leading nonprofit organizations, we have committed to driving real change in areas in which we can make the greatest impact,” Meyers told Focus: Atlanta.