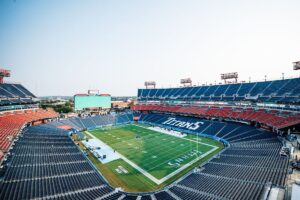 2 min read May 2022— The Tennessee Titans have been in a long debate over whether their Nissan Stadium’s renovations are worth continuing as rising costs in materials and supply have doubled in the past year. Now, the team is considering a different solution with a proposed $1.9 billion price tag.

Several accommodations are needed to buttress Nissan Stadium’s structural integrity. Those necessary renovations include, but are not limited to, electricity, replacement of steel and plumbing repairs, which are all contributing factors to rising costs, suggesting the creation of a new stadium altogether.

A Titan spokesperson told Axios that “the stadium’s structural frame was built with concrete and needs to be largely replaced with steel. The mechanical, plumbing, and electrical systems need to be completely replaced. The window system throughout the building is so antiquated that it is not even manufactured anymore.”

After years of rising renovation costs at the stadium, located in Downtown Nashville, the team’s management has launched a more direct approach to amplifying its stadium needs. On April 21, the Tennessee state legislature approved $500 million in bonds for a new, enclosed stadium in lieu of the continuation of expensive renovations.

The costs for the new facility are broken down into two funding sources: $500 million in state bonds and $700 million coming from the Titans’ owners. Where the remaining funding will come from is unclear and still has to be arranged. The Titans and Nashville officials have been in discussion for months now.

If and when the stadium is built, expected construction includes several amenities and new modern designs. The team and its owners expect to see a 4-million- to 6-million-square-foot campus of retail, office and residential buildings.

Potential problems for the construction of the new stadium include continued inflationary pressure coupled with infrastructure demands. Such effects have spiked projections from $600 million to $1 billion needed for just the proper maintenance of a “first-class” stadium.

Since their introduction in 1998, the Titans have been essential to the sports scene and local tourism in Nashville. In 2019, direct visitor spend totaled $7.52 billion.

To help pay for the stadium, the state legislature has introduced a bill that would allow metro Nashville to raise its hotel tax by 1 percentage point, which could result in a $10 million increase in annual hotel tax revenue for Davidson County.

Though the proposed stadium has not yet been approved, both the Titans and city and state officials are optimistic, with hopes a new stadium will prove a major attraction and increase tourism to the region.