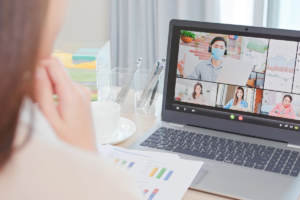 2 min read May 2021 — The acceleration and adoption of remote work capabilities has been a silver lining throughout the pandemic, a moment in time that stress-tested the viability of the work from home structure. In Tampa Bay, the market has been touted as one of the best places for remote working in 2021 by SmartAsset. However, while the mainstream adoption of remote work will likely continue to redefine corporate cultures well after COVID-19 is contained, local residents strongly support continued investments in Tampa Bay’s regional transit system.

A recent survey by the Tampa Bay Area Regional Transit Authority (TBARTA) shows strong resident support for increased investments in regional transit options. According to TBARTA’s Transit & Telework Survey findings, 82% of people surveyed agreed or strongly agreed the Tampa Bay region would benefit from increased regional transit, regardless of the mode of transportation, compared to an 8% disagreement rate.

The 35-question survey was distributed across TBARTA’s five-county region during the first three months of 2021, with 549 responses. Of the respondents, 58% live in Hillsborough County, with 22% in Pinellas, 9% in Pasco, 4% in Manatee and 2% in Hernando counties.

“The COVID-19 pandemic drastically altered our work routines and transportation habits, and we’re just beginning to understand how that will impact the years ahead,” TBARTA’s Executive Director David Green said in a press release. “The Transit & Telework Survey was undertaken as a first-step to measure potential changes to the way Tampa Bay moves and works, as well as the role TBARTA can play in developing regional transit to better connect people and places.”

Support for dedicated funding to transit organizations such as TBARTA also received a favorable response, the survey found. Seventy-four percent of those surveyed believe it is “extremely important or very important to support TBARTA, when asked about the importance of a dedicated budget for TBARTA and its efforts to expand regional transit across Tampa Bay, the survey found. “TBARTA does not operate independently, we are a partner to county and city governments, metropolitan planning organizations, transit agencies and Florida’s Department of Transportation,”  Green said. “Our mission is to help local leaders address their needs and develop new regional transit solutions to help solve local problems. Regional transit plays a key role in economic prosperity across the country, and there is a great opportunity for the same in Tampa Bay.”

The Tampa Bay market did well during the pandemic-related meteoric rise of remote work adoption. St. Petersburg and Tampa landed on SmartAsset’s Best Cities to Work From Home in 2021. St. Petersburg ranked as the fifth-best city for working from home, according to the financial technology company’s recent report. It was the only Florida market to crack the Top 10. St. Pete’s high percentage of remote workers as well as low unemployment catapulted the metro to the top tier of the list. “As of October 2020, the greater Pinellas County unemployment rate was just 5.2%, which is 1.5 percentage points below the national average. Remote work has also grown more popular here over the years: The percentage of the workforce working from home grew by 4.6% in St. Petersburg from 2014 to 2019, the third-highest increase in the study,” SmartAsset noted about the Pinellas County city. Tampa landed a few spots behind St. Pete at No. 28. Like it’s counterpart, Tampa featured a high percentage of remote workers as well as a high percentage that could work from home. The only other Florida market among the Top 35 was Jacksonville, coming in at No. 33.