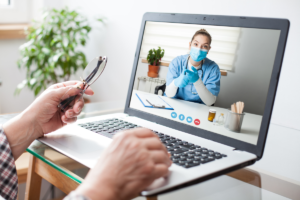 2 min read August 2021 — For many years, pioneering healthcare professionals have been promoting telehealth and technological innovations to make the business of caring for patients easier and more efficient. But the ideas often gained little traction, and normally among niche circles. Until now. Medical technology is now becoming mainstream, especially in Tampa Bay, known as one of Florida’s preeminent life sciences hubs.

According to reports, the number of Americans using telemedicine in 2020 almost doubled on the year to 41.7 million. In the same year, healthcare companies raised over $80.6 billion, up from $57.3 billion in 2019.

This combination of medical expertise, innovation and increased funding, in addition to a much more wide scale acceptance of technology, has led to the rise of medtech in Tampa Bay.

One example of this can be seen in a recent partnership between Tampa General Hospital and the Florida-Israel Business Accelerator (FIBA) to use innovative solutions to improve healthcare delivery in the region. Seven Israeli startups of the 50 applicants were selected to create ways to streamline the hospital’s day-to-day operations.

Israel is known as a global leader in healthcare innovation, and earlier in the year Tampa General announced another partnership, this time with Sheba Medical Center, a renowned teaching hospital located in Tel Aviv.

In fact, Tampa General is doing so much to adopt new technologies into its operations that,  this May, it received a Stage 7 designation from the Healthcare Information and Management Systems Society. The hospital’s outpatient unit was awarded for its success in outpatient and ambulatory EMR adoption, capabilities and usage. Less than 7% of the nation’s hospitals have been able to achieve the Stage 7 designation.

And Tampa General is not the only hospital to get excited about the prospect of medical technologies. In July, Largo Medical Center announced it would offer a brand-new FDA-approved technology to help with the early detection of colon cancer. The technology adds AI to a standard colonoscopy to help reduce the 20-25% miss-rate for polyp detection.

Tampa-based nursing school USF Health has also partnered with a local startup called Edgility, which provides technology that improves communication gaps and delays in information flow. The program will allow USF’s trainee nurses the opportunity to gain insight into digital technologies and ways in which it can improve patient outcomes.

Technology can be deployed in the healthcare field in a variety of ways, from telemedicine to advanced diagnostics and everything in between. This could include improving medical access to rural communities, improving accuracy of procedures, even down to simplifying the way patient records are held to create greater efficiency.

It is no secret, then, why venture capital firms are pouring funding into the space. In January, Tampa startup Aspen RxHealth, a company that uses telehealth and the gig economy, received $23 million in funding following a successful $9 million Series A funding round. Also in January, SOMA Global, a cloud-based system for first responders, raised $22.5 million in Series A funding from Weatherford Capital. And Tampa-based startup eRemede closed a $1.55 million funding round this July that will allow it to fully integrate its platform into a telehealth format. The company has developed an app that facilitates direct patient-doctor communication while keeping patient records secure.

Tampa’s medtech sector is growing fast but there is still plenty of opportunity now that people are aware of the possibilities. According to an EY report, the sector has consistently outperformed broader healthcare indices, including Big Pharma and the NASDAQ Biotechnology Index. The industry was valued at roughly half a trillion dollars in 2019 and is expected to grow to over $670 billion by 2027.