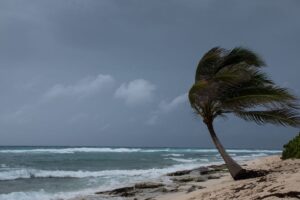 2 min read September 2022— Hurricane season is here and the latest storm, Hurricane Ian, could potentially impact Tampa Bay later this week, with authorities urging residents and businesses to prepare ahead of what is expected to be a major impact.

As of Monday, Ian is 275 miles southeast of Cuba’s western edge, with sustained 80 mph winds and headed northwest at 14 mph, reports WPBF. The storm system strengthened into a hurricane over the course of the weekend, with Gov. Ron DeSantis authorizing a state of emergency for Florida in anticipation of the storm, expanding it from the original 24-county declaration on Friday.

“This storm has the potential to strengthen into a major hurricane and we encourage all Floridians to make their preparations. We are coordinating with all state and local government partners to track potential impacts of this storm.” DeSantis said in a statement on Sunday.

Hurricanes are part and parcel of Florida living, and while some residents across the region may take a cavalier attitude toward them, they nevertheless can cause billions of dollars in damages and wreak havoc on coastal communities. In 2017, Hurricane Irma caused over $77 billion in damages across Puerto Rico and Florida before finally dissipating over Georgia and Alabama, with wind and water damage alone totalling $50 billion.

Hurricane Ian is the fourth Atlantic hurricane of the year, with roughly 100 miles of Florida’s coast under hurricane watch. The stretch along the state’s Gulf Coast, from Englewood to the Anclote River, includes Tampa, Clearwater, and St. Petersburg. While currently labeled a category 1, the storm is expected to strengthen into a major category 4 hurricane, with sustained wind speeds as high as 115 mph just before the storm arrives west of Tampa Bay, with the center moving north towards Homosassa Springs and Cedar Key.

Local officials have begun announcing preparations for residents and across the community. During a press conference, Cathie Perkins, Pinellas County Director of Emergency Management, warned residents that if the storm shifted further east, more significant winds could impact the area. Storm surge and flooding were expected. “This is going to be a lot more than what people saw with Hurricane Ada a few years ago. Those of you who lived on the barrier islands and saw flooding, expect worse than that,” Perkins said. “This storm is trending to slow down. It potentially could sit on top of us for 47 hours. That’s a lot of rain, and it won’t be able to drain out quickly.” Perkins urged residents to raise belongings and make evacuation preparations.

While the storm is not expected to arrive before Wednesday, officials continue to urge residents to make all the necessary preparations and evacuate should they find themselves in potential flood zones.