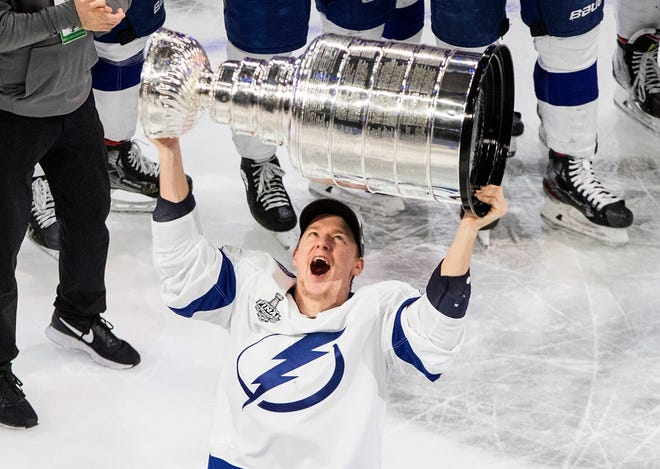 2 min read October 2020 —It’s been 16 long years but the Stanley Cup has made its way back to Tampa Bay. After a six-game battle with the Dallas Stars, the Tampa Bay Lightning were able to close out the NHL finals series with a dominant 2-0 performance. And while they may have been playing to an empty arena, nothing can take away from the fact that the Lightning are now two-time Stanley Cup winners and their victory has brought some much-welcomed excitement back to the Bay.

This was a NHL season like no other, as the COVID-19 pandemic resulted in a stoppage of the regular season. The decision was ultimately made to finish out the 2020 season in a “bubble” environment, not dissimilar to the one created by the NBA. All games were played in two hub cities: Edmonton and Toronto. The Lightning entered the bubble as the No. 2 team in the Eastern Conference with a solid record of 43 wins to 21 losses.

Expectations for the team weren’t just high because of their 2020 standing. The Lightning had finished the 2019 season with a historic 62 wins. Yet, despite that phenomenal regular season, a quick first-round sweep by the Columbus Blue Jackets that same year ultimately resulted in Tampa Bay’s home team playing this season with a serious chip on their shoulder. Lightning coach Jon Cooper spoke to Sportsnet about using last season’s failures as the team’s primary motivation to win it all this year.

“Sometimes in failure, you find success,” Cooper told Sportsnet. “It doesn’t come easy. People say you never know when you’re going to go back. I truly believe it was the heartbreak we suffered that brought us here today.”

This championship for the Tampa Bay Lightning was also a win for a Tampa Bay community that, like the rest of the world, has seen the year lambasted by the ongoing pandemic. In celebration of their hockey team’s Stanley Cup victory and the region’s first major sports championship in 16 years, Tampa Bay held two large celebratory events, one on water and one on land. On Wednesday Sept.30, a variety of boats floated up the Hillsborough River to Downtown Tampa carrying with them the Lightning’s roster, staff and some fans to celebrate the triumph.

This boat parade, which saw thousands of fans gather along the river’s edge to get a glimpse of their champions, was followed by a victory rally at Raymond James Stadium that was attended by an estimated 11,000 socially distanced fans.

Tampa’s Mayor Jane Castor spoke at the celebration and highlighted what the momentous achievement meant for the region as well as drawing the comparison between Tampa Bay’s resilience and the team’s as it made its way along its playoff run.

“This is an incredible day for Tampa Bay, I tell you I could not be more excited,” Mayor Castor remarked. “Now, these are difficult times for us, there’s absolutely no doubt about that, but we are used to difficult times and difficult undertakings like bringing home the Stanley Cup. And these guys define what it is to be from Tampa Bay. They showed the resilience, the determination and the grit that we have all shown as a community here and we could not be more excited to bring home the Stanley Cup for the second time.”

Her sentiment and this victory both serve as a positive moment and breath of fresh air for the Tampa Bay region in what has otherwise been a tumultuous year.