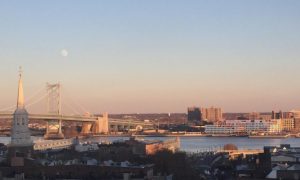 2 min read January 2020 — What once was the poorest city in the nation is now showing significant advances as a result of its renaissance efforts. Camden City is showing positive trends in key economic areas, according to a recent survey from the U.S. Census Bureau,  using data derived from the American Community Survey (ACS).

The survey data showed significant improvements in areas such as poverty, educational attainment, employment and unemployment.

“Change doesn’t happen overnight, but in findings like these we are seeing the very real snowballing effect of progressive policies put into place to better the lives of residents in the City,” said Freeholder Director Louis Cappelli, Jr in a press release.

The surge in educational attainment among 18-24-year olds is one of the significant trends Camden has seen during the last decade. The most recent estimate shows the population achieving high school or higher levels of education is now at 83.3 percent. From 2006 to 2010, approximately 68 percent of young adults in the city had graduated high school, earned their G.E.D., attended some college, or received an associate’s, bachelor’s or advanced degree.

“Ensuring all of our students and families are attaining a quality education and gaining access to advanced educational opportunities is our objective. This report underscores the progress being made in the classroom and throughout our district,” Superintendent Katrina McCombs said in a press release.

The survey also showed that the number of residents employed has increased by more than 2,500 and the number of unemployed residents dropped from over 7,700 to less than 3,900.  According to city data, the unemployment rate over the five years ending in 2018 was 12.6%, which represents a big decline from the 24.4 percent reported from 2009 to 2013.

Camden’s “eds and meds” sector, which employs almost 40% of the Camden workforce, has also been key to the city’s revitalization. Over $1 billion has been invested in the “eds and meds” sector, with an additional $175 million planned. Camden is home to five eds and meds institutions, leading research and innovative efforts throughout the region and the national and international community.

To support local businesses and residents, workforce initiatives like private initiative Camden Works, launched in 2019, have been forged to ensure Camden continues its growth path. The employment training and placement program is designed to leverage resources from local entities to provide training, education and placement.

“Unparalleled collaboration and a holistic approach to revitalization is resulting in real progress in Camden,” said Camden Mayor Francisco Moran in a press release. “The data indicates that Camden is making substantial gains as it relates to reducing poverty, improving academic outcomes and increasing employment prospects. This kind of sustained progress has not been witnessed in decades.  These are all positive signs for our residents and indicators that the quality of life continues to improve.”

The ACS produces estimates of selected population characteristics for one- and five-year periods. Five-year estimates include data aggregated over a 60-month period and attempt to show the characteristics of the city over that entire stretch.