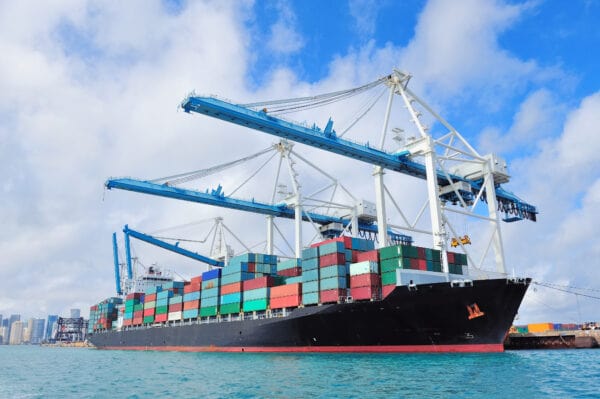 2 min read April 2021 — Over the course of six days, nearly $60 billion of global trade was disrupted during the Suez Canal incident. The incident is helping to further the argument for nearshoring (moving operations to a nearby country) with regard to trade with the United States, which could be a boon for South Florida going forward.

“There are weak points everywhere. Suez isn’t the only one,” Chris Nicholson, CEO of Pathmind, stated in an interview with Forbes. Outsourcing from countries on the other side of the globe looks great on paper, but there are hidden costs. “A lot of companies outsource different parts of their supply chain to be managed by others, which makes them passive consumers of other peoples’ mistakes. There are cheap manufacturers on different continents, but you pay the price in the complexity of your supply chain. It is a hidden price until Suez happen[ed], and then it is not hidden anymore,” said Nicholson.

From the pandemic to the Suez Canal incident, the events from the past year demonstrate there is always the potential for an unanticipated risk to occur. Nearshoring helps to mitigate these risks.

According to an older but relevant poll by AlixPartners of 80 C-level and other senior executives in manufacturing-oriented companies from more than 15 different industries, advantages of nearshoring include lower freight costs, improved speed-to-market times and lower inventory costs, as well as easier time-zone coordination and better cultural alignments.

Nicholson believes that the Suez Canal incident,“…. and other events are going to push companies to look at more alternatives like onshoring and nearshoring.” Of course, a push toward nearshoring would not only benefit the Latin American countries that would absorb this business, but also the South Florida ports that would receive the resulting activity.

The Latin America and Caribbean region accounts for nearly 50% of PortMiami’s cargo activity. PortMiami is the closest U.S. East Coast port to Mexico’s Gulf Coast, with Mexico being the most attractive locale for re-sourcing manufacturing operations closer to the U.S. market, according to the poll by AlixPartners.

Paul Anderson, CEO of Port Tampa Bay, discussed with Invest: how the United States government has pushed to rejuvenate trading with Latin American partners. “With the new USMCA trade agreement, the United States is in a better position with its trading partners, which is bolstered by global sourcing strategies resulting in nearshoring manufacturing and distribution points for e-commerce points and continued growth and expanded trade with Mexico.”

As well, Mexico itself is looking to bolster its presence in U.S. markets. “We’re working to see how we can take advantage of the recently ratified USMCA deal, which is behind all commercial relations between our two countries. We put together a working group for Mexico and Florida to look into how more could be done to improve the maritime line between Mexico and Florida,” said Jonathan Chait Auerbach, consul general of Mexico in Miami.

Miami, the gateway to Latin America, along with the rest of South Florida, is poised to benefit from future outsourcing to Latin American countries, and recent events that have showcased risks in the global supply chain promote that goal.