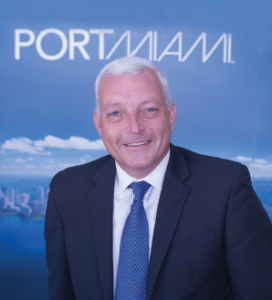 How much of PortMiami’s business is comprised of the cruise versus containerized cargo segment?
Revenues are significant from both sides, with roughly 60 percent of the direct revenue to the port coming from cruise and 40 percent from cargo; however, cargo comprises nearly 80 percent of the economic impact to Miami-Dade County. The cruise industry is extremely significant, driving tourism and employment growth; it is the number one contributor to Miami-Dade’s hotel occupancy. In the fiscal year 2014, PortMiami had a record-breaking year, processing 4.77 million cruise passengers in our 45th consecutive year as the world’s largest cruise home port. We benefit from having Carnival Corporation, Royal Caribbean Cruise Lines, and Norwegian Cruise Lines – collectively comprising 75 percent of the global cruise market – headquartered in Miami-Dade County.
How will the completion of PortMiami’s Deep Dredge Project impact South Florida?
The Deep Dredge Project is a game-changer for this region. Upon the project’s completion in mid-2015, we will be the only U.S. port south of Virginia at a water depth of 50 feet. This will allow us to berth much larger vessels and reclaim some of the transshipment business we lost to ports in Panama and the Caribbean in the early 2000s.
This deeper draft capacity is of great interest to the large shipping companies, who save money, thus make money, by consolidating containers from multiple lines into a single larger vessel. The depth will enable us to capture new cargo business, particularly from Asia, on vessels that will now be able to transit the expanded Pan-ama Canal upon its completion in early 2016.
What is PortMiami’s strategy for the medium term?
Recapturing transshipment is a top priority. We lost much of this business after 9/11 because of high security-related costs and inspection protocols. Today we work closely with U.S. Customs and Border Protection to create a commercially friendly business environment at the port, while maintaining the highest standards of security. In conjunction with our partners at Florida East Coast Railway, we are targeting industries such as frozen poultry, beef, scrap metals, scrap paper, corn, soy, grains and other food products, to boost cargo volumes passing through the port.  Part of the port’s initiative is to export more loaded containers to complement the importation of products coming in from Asia and Europe. We also anticipate continued growth in trade to and from Latin America and the Caribbean as well as starting new trade routes with emerging markets such as India and Africa. On the cruise side, we are working on the construction of a new berth and terminal for completion within the next two to five years.  These improvements will expand our passenger capacity by approximately 20-25 percent.