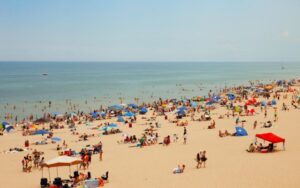 2 min read March 2021 —Likely buoyed by the availability of vaccines, and overall pent-up travel demand, Florida has maintained its reputation as a top travel destination this spring break season, with markets like Tampa Bay and Miami drawing much of the travel activity. However, while Tampa Bay was able to accommodate the surge of travelers without major issues, the Miami market has been overwhelmed as crowds flocked to South Florida.

As federal health officials continue to warn against travel due to COVID-19, the national Transportation Security Administration’s (TSA) March figures point to some of the highest travel numbers since the onset of the pandemic last year. The TSA consistently registered more than a million passengers daily for most of March, the administration reported. In 2020, Florida welcomed an estimated 86 million total visitors despite the ongoing coronavirus threats. That is a 34% decline year over year, according to Visit Florida.

In Tampa, spring break travel figures were not as disproportionately impacted this year as compared to pre-COVID levels. The Tampa Bay International Airport saw almost 59,000 travelers last Saturday and nearly 58,000 travelers last Sunday, the Tampa Bay Times reported. In 2019, and before the onset of the pandemic, the airport reported about 75,000 to 80,000 passengers during the spring break season, the paper reported.

Hotel occupancy hovered over 90% this past weekend in Pinellas County, according to Spectrum News, while the beaches teemed with activity. Aside from a few arrests earlier in the week, local law enforcement did not see any major disturbances in the Tampa area, the news outlet reported.

Further down the Florida coast, the Miami market is a different story. It has attracted an overflow of spring breakers and made national headlines in the process.

Last week, the Miami market saw some of its highest travel numbers since last March. The Miami International Airport saw almost 90,000 passengers in one day, neighboring the 110,000 daily number prior to the pandemic, according to NBC 6. “We’re very glad to see the traffic come back and to see safe travel come back,” airport spokesman Greg Chin told the news outlet. “Tourism drives the economy locally here, of course,” Chin told NBC 6. “(It) drives business revenue, drives tourism spending, hotel stays, spending in the community — so this is huge for our community to see travel come back and we want to encourage safe travel of course.”

Too much of a good thing, however, proved troublesome this spring break season. Thousands gathered throughout South Beach last weekend, overwhelming the city of Miami Beach and its ability to control the crowds. Reports of street fights, vandalism, even dangerous stampedes swamped authorities throughout the weekend, according to several reports. The scene prompted Miami Beach Police to bring out SWAT teams to control the diverse revelers. Ultimately, the city of Miami Beach instituted an emergency 8 p.m. curfew that is expected to last well into April after the end of spring break season, according to different reports.

“I believe it’s a lot of pent-up demand from the pandemic and people wanting to get out,” Miami Beach Commissioner David Richardson, told the New York times. “And our state has been publicly advertised as being open, so that’s contributing to the issue.”

Miami Beach Police said on Sunday night that they had made over 50 arrests and confiscated eight firearms since last Friday, the paper reported.