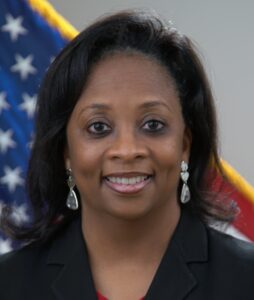 2 min read July 2021 — Going strong in its fifth year since incorporation, the city of South Fulton is hitting its stride as it works to become the go-to place to live, work and play in the state of Georgia. Tammi Saddler Jones, city manager, shares how the city is preparing for future growth.

What is the essence of South Fulton’s economic and industry base?

We have a robust and diverse economic base. We annexed Fulton Industrial Boulevard into our city in May 2021. That brought 1,000 businesses employing 28,000 people. We’re looking at an estimated $9 million tax revenue that will be coming into South Fulton.

To address public service and safety initiatives in that particular area alone, the city invested $3 million in 40 new police cars and two new fire engines. Our police department has made an immediate and significant impact on crime in Fulton Industrial through strategic patrols and investigations.

We have nine business nodes development focus areas strategically dispersed throughout our city, each with its own specific traits. We’ve seen an increase in our businesses, particularly with one of the most recent developments in our city, the Sandtown Crossing, which is a close to $25 million investment at the intersection of Camp Creek Parkway and Campbellton Road. It is attracting several new retail businesses. We are also seeing increased development in other areas along Camp Creek Parkway.

What is the focus of the new Tax Allocation District Plan (TAD)?

The city council approved those tax allocation districts in October 2020. One is called the Eastside TAD and the other is the Westside TAD. The former encompasses Old National and Roosevelt highways and the Red Oak Historic District. The latter spreads over Camp Creek Parkway, Sandtown and Cascade-Palmetto Highway. We are enormously proud that the council made the decision to implement this plan. Both TADs have over 1,200 parcels, roughly 5,845 acres, with a taxable real estate of $157 million. Broken down, the Eastside TAD has 961 parcels at a fair market value of $233 million, but a taxable value of $93 million. The WestsideTAD has a fair market value of $159 million and a taxable value of $64 million for 337 parcels.

What are the top-priority infrastructure needs or projects for the city?

South Fulton is a unique city. Within a 15-minute drive, you can go from strongly urban to picturesque rural. That poses a unique set of opportunities, but we remain committed to improving the quality of life in all areas.

In early 2020, we created the city’s Urban Redevelopment Agency, which is funding $17 million in improvements at our parks and fire stations, as well as other city facilities. We recently completed a massive $16 million project to pave 170 miles of city streets and roads. In partnership with the Georgia Department of Transportation, we recently completed a new roundabout at New Hope and Boat Rock Roads and are about to start work on another at Stonewall Tell and Butner roads. We are working to replace old bridges that present safety hazards and we are conducting separate studies focused on improving our networks of sidewalks and streetlights.

We offer incentives for targeted industries to help address lack of access to infrastructure. When we talk about infrastructure, I can’t help but think about broadband, which is critical for us. In some of the more rural areas within our city limits, we are focusing our efforts on improving broadband not just for our residents, but for businesses too. We are intent on injecting some of our $11 million of American Rescue Fund money to address broadband needs; helping businesses thrive is the overarching objective of our city.

On the subject of small businesses, CollabSouth is a small business resource center that acts as an incubator for entrepreneurs and small businesses here in the city. We are going to be continuing to focus on bringing businesses into South Fulton. We have a lot to offer here: our proximity to the airport, to major highways within the city, to Atlanta. These location advantages make us a highly attractive community for any business or resident who would like to move to our area. Our tagline is, “The city of South Fulton, where you want to be.” This is the place that people need to consider when they’re looking at establishing their business.

What is your outlook for the city of South Fulton?

2021 has a lot of possibilities. It is our expectation to continue to provide world-class service to our citizens and businesses. We are also looking forward to closing on a major amenity here, the Wolf Creek Amphitheater. We’re going to be acquiring that from Fulton County and hopefully be able to bring some entertainment to the city. We also have looked at that specific area as our town center. We’re going to be doing a lot of planning on how to bring to fruition our town center area. We are a new city; we are currently renting the building that we are in. We would like to own and have our own city hall building and other city facilities down the line, and use that area for businesses to come in and also to have some public-private partnerships.

As we approach our fifth year as a city, identity is an essential aspect to distinguish ourselves from other cities. We will continue working on who we are and raising awareness as to what we offer. We have our own city strategic plan. It’s just a matter of implementing that to pave the way toward where we want to go as a city. We’re still a work in progress. We have a very vocal, participative community and they have no problem telling you what they want here in the city itself and we’re very happy about that. Citizen engagement is key to us, as is being transparent. Many of the ideas that cities implement come from people from outside of the city organization. We’re always open-minded and willing to listen to people, taking their input to help continue to make our city a great place to live, work and play. Business recruitment, business retention and hiring key staff to run our departments to ensure we have forward-thinking and progressive individuals here that can take us to the next level will also prove essential going forward.