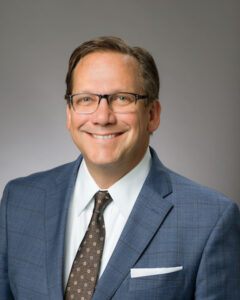 2 min read April 2021 — Capitol Financial Solutions is a financial services firm that specializes in working with business owners, entrepreneurs and professionals. Its services include financial planning, securities, and insurance. President and CEO Robert Turner spoke with Invest: about managing client anxiety in the past year and what the firm is doing to attract the next generation of financial advisers.

How did you go about managing client anxiety through the past year’s uncertainty?

It’s always challenging to address the psychological side of investing but it was harder than usual last year. The main goal is to convince clients to stay the course. We try to educate ourselves during the intake process to understand what kind of risk appetite they have and if we match that correctly, they will remain invested.

Last year, there was a lot of volatility in the market, so the challenge was to not only manage the volatility but also to take advantage of it. When we are systematically investing in a market that is going up and down, we can do well in the long term. Some of our clients actually took the opportunity to use some of the money they had sitting on the sidelines and reinvest it in the market. If anything was exposed last year, it is probably that some investors were getting a little greedy and were a little too thinly stretched than they should have been due to the bull market. Some of those investors couldn’t handle the volatility because their risk tolerance was not balanced since they had gotten used to being more aggressive.

How do you evaluate the role of social media in encouraging more young people to enter the world of trading?

In the social media age, there are now more and more investors dipping their toes into the market, which is important because it is critical to start investing early. However, the risk is the lack of knowledge surrounding highly volatile trades, such as the GameStop trade, meaning that if these young investors expecting to make significant returns get burned, they are unlikely to return to the market in the future.

How will the risk of inflation impact your business and your clients’ investments?

Recent data suggests inflation is not yet becoming a problem but it has to happen long term with this much debt. All the stimulus acts together during the pandemic total around $44,000 per household. There will also be pent-up demand. Looking at what is happening in the housing market alone is compounding the issue. Some inflation is not bad, especially for those nearing retirement. It’s very hard to get a return on investments that are not linked to the stock markets but inflation would drive up returns to the point that people can put more money in fixed or nonmarket, correlated investments. It can help in some ways as long as it’s controlled but the market is generally the only way that we can beat inflation. We’ve been in the lowest interest rate environment for the longest time and this really hurts some businesses, including insurance companies and banks.

How can the industry best attract the next generation of financial advisers?

There will be fewer advisers because the trend is not going to reverse quickly. So, the existing advisers need to use the technology available to still give the client the same level of services. We’re part of an independent adviser group that is trying to develop the next generation of advisers and put the resources in place for training them. About 18-20% of our advisers are in their first five years, which is unusual because so many of the companies have been so focused on recruiting experienced advisers and they’ve been able to grow without developing talent. But at some point, that will become an issue, especially as the population ages.

What are the main factors supporting growth within the Triangle area?

The Triangle is uniquely positioned for growth and part of that is because we have always had a great university population. We have notable universities such as UNC,NC State and Duke, but we also have Meredith and Shaw and many other strong institutions nearby. Our businesses are also very diversified, which puts us at an economic advantage. The high tech and life sciences sectors are exploding, and I don’t see that coming to an end, especially as we have a wealthy population that is living longer and wants to continue to be healthy.

What is your outlook for the near term?

I think from a broader perspective, the economy will have to do well. The market will follow. We will continue to see volatility but it’s almost like some of the expansion seen after World War II because this pandemic has affected the entire global community. This drives people to step up and meet challenges and it also drives technology faster. Development of this vaccine will aid us for years to come. We now have pent-up demand and savings rates across the United States have risen, which will fuel the economy. The concern is corporate taxes. If they are increased and businesses choose to invest elsewhere that will hurt us in the long run.