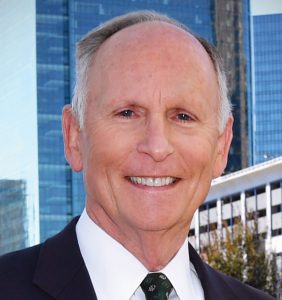 2 min read December 2019 — Philip Dubois has announced he will step down as UNC Charlotte’s chancellor in June 2020 after nearly 15 years on the job. In an interview with Invest: Charlotte, he discussed the advances made by the university, once “Charlotte’s best kept secret,” to improve recognition and enrollment as well as involvement with the business community, from business incubators to bringing the city’s light rail directly to the campus.

What strategies did you implement to increase the school’s visibility in the Charlotte area and how did they work out?

I have always viewed the business community and the nonprofit community as incredible resources for the university because they are a source of employment for our graduates, an opportunity for internships for our students, and they have research challenges that the university can help them with. Our institutional mission states that we are committed to helping the region solve a variety of problems, whether, in the words of our mission statement, they are “cultural, economic, educational, environmental, health or social” in nature. I felt that we weren’t taking full advantage of being in Charlotte. We did seem to be the best kept secret in Charlotte.

The first thing I did was to create a university relations and community affairs division. The second strategy was for myself to become physically visible in the city’s activities, so I ended up on most of the economic development boards. We also invested a good deal in branding and marketing, which ended up producing the slogan, “Stake Your Claim,” reflecting the fact that the community needed to own the university in the same way that the university was a partner to the city. That branding was launched over a decade ago and it has recently been updated with the tag, “We Are All Niners.” A fourth strategy was to connect the university physically, and the opportunity arose with the light rail. We decided to bring the light rail to the campus because unless it actually came on the physical campus, and not merely adjacent to a city street, the federal government would not provide the matching 50% funds for construction. The construction of the Center City building nine years ago was another large factor.

What has helped the university increase its enrollment alongside the growth of the city?

I have always thought that Charlotte was under-resourced in terms of higher education. When I arrived here, we enrolled 20,700 students. You could add Queens University, Davidson College, Johnson C. Smith University, and several others and we probably still would have been serving 30,000 students in terms of total educational horsepower, and we were the only public research university. We completed a couple of enrollment studies and concluded that we could be 35,000 students strong by 2020 without working too hard. But, because of the Great Recession, we had to slow our enrollment growth as we lost $55 million in recurring appropriations during that time. We couldn’t take all the students without the additional resources. But once we were past the recession, we invested in our enrollment management, established a big, ambitious, gaudy goal, and  began to grow rapidly again. One of the things that happened is that private real estate developers bought up all the property around the university because they knew we were going to be growing. We basically fed the construction of a massive amount of student housing within a mile of campus that we didn’t have to build ourselves.

What has been the driver behind capital expenditures for the university?

A growing university has many needs, including new academic buildings, student support facilities, residence halls and dining centers, recreation amenities like intramural fields and recreation centers, and an expanded array of intercollegiate athletic facilities, as well as parking decks. We have constructed all of those things, expending over $1.2 billion on major construction and renovation since  2005.

Several of these projects were strategically important on the academic side and in solidifying our relationship with the business community. UNC Charlotte Center City was No. 1. We added a bio informatics building that turned out to be important with the development of the North Carolina Research Campus in Kannapolis. We also built a university-industry partnership building that we call PORTAL, an acronym for Partnership, Outreach, and Research to Accelerate Learning. The reason for calling it that was to signal to the business community that if they wanted to connect with the university, this was the entry point. We relocated to this building a pre-existing business incubator, located five miles from the main campus in the University Research Park, and rebranded the services it provided to budding entrepreneurs as Ventureprise and relocated our technology transfer offices as well. Our goal was to have a “one-stop shop” for entrepreneurs in Charlotte.

That was and is a strategically important connector with the business community. We funded that facility using our federal indirect cost revenues for the first time. These are the reimbursements we get from the federal government for doing research, about 50 cents on the dollar. We funded that building using 30-year bonds serviced by that stream of revenue.

The most recent academic building for which we pushed very hard in 2016 was the passage of the Connect NC bond measure, which brought us our new $90-million science building. It is under construction and will be ready for the class of fall 2021.

To learn more about our interviewee, visit: https://www.uncc.edu/