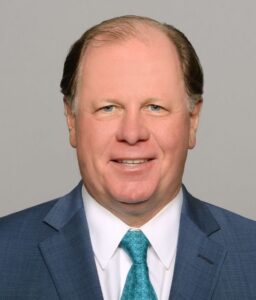 2 min read February 2022 — The NFL’s Jacksonville Jaguars have been an integral part of the city’s landscape since the mid-1990s. In an interview with Invest:, President Mark Lamping discussed the team’s contribution to the community’s economic and cultural development, new projects that are expected to boost the Downtown area and his outlook for the near term.

How important has the Jaguars’ presence been to the city’s growth?

The arrival of the Jaguars in the mid-’90s has played a role in the enormous economic and cultural growth of Jacksonville. If nothing else, Jacksonville residents were proud when this city was selected to become an NFL city. Even when we’re not as competitive as a team as we’d like to be for our fans, the city of Jacksonville is able to attract thousands and thousands of NFL fans from across the country to come here and watch an NFL game, which is amplified by the fact that we’re in a city and a state that people love to visit.

What is the significance of the 1st DownTown Jacksonville platform?

To create an environment where residents can enjoy NFL games in Northeast Florida for generations to come, there are a number of things we need to do. First and foremost, we need to put a better football team on the field. We also have to make sure that the facility we play in meets the needs of our fans and stakeholders, not just today but well into the future. The strength of Downtown Jacksonville will also play an enormous role in the stability of the team. As such, Jaguars owner Shad Khan is investing hundreds of millions of dollars to help meet all three of those objectives.

1st DownTown Jacksonville is our platform for sharing details on our development projects in and around TIAA Bank Field, including the Shipyards and our Sports Performance Center. We’re committed to bringing a product to Downtown that currently does not exist, including a Four Seasons Hotel and Residences, a more functional full-service marina to support transient boaters and an office building. All of these projects are designed to be catalytic, and we’re already seeing development adjacent to where Shad is investing. For Downtown Jacksonville to reach its full potential, it’s going to take a lot of people and a lot of projects, and we couldn’t be more excited about the amount of progress that’s been made in a very short amount of time.

How has the pandemic impacted the desires and needs of Jaguar fans?

The needs, desires and wants of our fans continue to evolve. They’re totally different today than where they were just two years ago, and that evolution will continue. We have to make sure that the things we put in place are adaptable and that as an organization we remain in tune with the needs and desires of our fans. For example, one of the things that came out of the pandemic was upgrading the stadium and its facilities to become touchless. All of the NFL teams are using digital ticketing and contactless transactions and concessions. This not only has enhanced the overall hygiene within the stadium but also the fans’ experience by speeding transaction times and making transactions more convenient.

What is your outlook for the coming three years?

I can’t overstate the importance of the developments that we were able to get over the line this year, particularly the Sports Performance Center. That project is the first step in building the stadium of the future here in Jacksonville and ensuring the sport of football in Northeast Florida for generations to come. I’ve been here for about 10 years, and I can’t point to a period within those 10 years where our interests were more aligned with the city of Jacksonville than they are today. We have been able to advance two major projects, totaling close to $500 million in development, approved by the city in unanimous fashion. We have learned from mistakes we’ve made in the past and we’re in a really good spot. We’re not at the destination yet, but we’re certainly on a path to a very successful future.