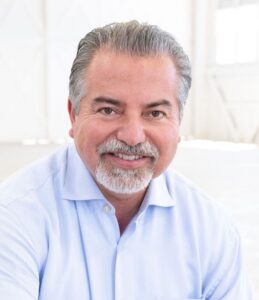 2 min read October 2021 — Brooks is a 1,308-acre community in San Antonio where more than 3,200 people live, work, learn and play. In an interview with Invest:, President and CEO Leo Gomez discussed what Brooks is, the growth the community has experienced since its founding, why companies are attracted to the community and his optimistic outlook.

Brooks is a growing mixed-use campus and appealing real estate opportunity on the south side of San Antonio, originally a military base for over 100 years. San Antonio has a great track record of demonstrating how former military bases can be transformed into positive economic development assets for a community. By redeveloping these former bases, we’re bringing investment back to parts of San Antonio that have been overlooked for decades.

At the end of the day, our vision is not just to redevelop the former Air Force Base, it’s to do it in a way that creates regional prosperity. We want to make sure that the neighborhoods and families around the former base realize economic opportunity; we don’t want to develop an island of prosperity. We look forward to there not being a difference of opportunity visually when you come on or off our campus. I am amazed at what we’re accomplishing despite the pandemic.

What growth has Brooks experienced since its founding?

The Air Force base in its heyday employed about 2,700 people, most of whom drove in from other parts of town. The disposable income these employees earned was not being reinvested in this corner of San Antonio but, rather, was taken back to their neighborhoods and other parts of town. Today, we have over 3,200 people working on the Brooks Campus for various private-sector employers. Many of those 3,200 live on and around the campus and are, therefore, spending the check that they’re earning here. The economic output is now about $1 billion per year from the transformational investment that has occurred here at Brooks.

What incentives are drawing companies to Brooks?

As a base redevelopment authority created by the state of Texas, we’re a tax-exempt development authority, so we’re able to provide those exemption opportunities. We enter into long-term leases and long-term build-to-suits, which enable us to offer the employer an opportunity where there is no tax burden on the investment they make here at Brooks.

What opportunities are there for further investment and development at Brooks?

Currently, we have several major employers in light industrial manufacturing, many of which are foreign-based companies that have established their first North American headquarters or operations here at Brooks. There are advantages to being located in San Antonio, Texas if you want to distribute your product throughout North America as well as Latin America. Within San Antonio, the advantageous place to set up operations is on the Brooks campus. Our Mayor often refers to us as the most international 1,300 acres in San Antonio, and we continue to ink deals. We have a couple of companies in the pipeline that, if successful, will nearly complete our light industrial development. We’ll still have some space across the campus, but we’re quickly developing.

The next big opportunity is developing medical, health and bioscience industries on the land that surrounds Mission Trail Baptist Hospital of Baptist Health System. The University of the Incarnate Word School of Osteopathic Medicine is on our campus with a student body of over 700 students. In addition, we have three high schools located at Brooks, one is dedicated to medical professions. We have a tremendous ecosystem for building that medical, healthcare and biosciences sector in this corner of San Antonio.

What is the state of residential activity at Brooks?

Among our initiatives is to continue to build residential communities. We intend for the people who work for the companies we’ve attracted here to have opportunities and a variety of options to live in the area and spend their paychecks here. We’ve developed four apartment communities and are redeveloping one existing neighborhood that used to be the old officers’ quarters, totaling about 1,400 units and 2,300 residents. The redevelopment of the old officers’ quarters will become a brand-new neighborhood with 450 single-family homes, which will attract an additional 1,000 residents. In addition, the first single-family, for-sale homes are underway. We already have long wait lists for these homes and the developer is even exploring additional opportunities for more.

What is your outlook for Brooks over the coming years?

We’re going to begin a transition from the development of our light industrial park to the development of a healthcare and biosciences sector, while continuing to build on our residential assets across the campus. We expect another 2,000 jobs over the next few years on top of the 3,200 we already have. We’re very optimistic and excited about our future growth.