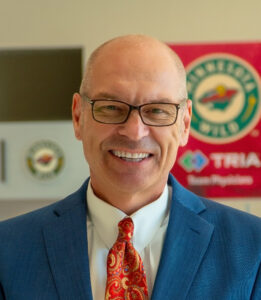 2 min read June 2021 — In an interview with Invest:, President of the Saint Paul Port Authority Lee Krueger talks about issues affecting the port authority, the savviness of the Midwestern farmer in increasing river traffic, the need for infrastructure improvements, and the Port Authority’s thriving real estate business, which cleans up and flips damaged sites of former industry.

How has tonnage been affected by global trade tensions and tariffs?

Tonnage is holding its own and growing. Regarding tariffs, I think it’s interesting when people underestimate the world knowledge of the farmers in the market. Those farmers know a lot more about tariffs and what’s going on in China than the average person in the Twin Cities. They know that a tariff on products coming in from China or another country will lead to retaliation, thereby putting tariffs on our goods and having a huge impact on farmers. I would say that the global economy and the tensions that exist are key for the river exports that we have. The global economy has a huge impact, that a lot of people don’t realize, on a small river port in the northern part of the country.

How are the port expansion projects progressing?

The Port Authority has been around since 1929 and the infrastructure is old. Some of the policies of President Biden and of the state are addressing this. That said, a lot of people don’t really understand the infrastructure on the river. The locks and dams are old; some of the dock walls have an expected shelf life of 40 years but are now pushing 60. We should be working on this because river shipping is efficient. Now, my numbers might be a little bit off on this, but a fully loaded tow of 12 to 15 barges takes hundreds of trucks off the road and multiple rail cars off the rails. It’s slower, but it’s cheaper. There are secondary benefits: avoiding the ware and tear on the road, saving that great amount of fuel, it’s safer. So, what you’re seeing is a demand for safe, efficient and environmentally friendly shipping. The problem that we have is that we just haven’t invested as much on the infrastructure for the locks, and the terminals themselves, that we should have. We’re trying to fix that through the state bonding programs. We would love to be a recipient of the federal funds that will become available, though we don’t know anything about that yet. There is a great economic benefit to getting products safely up and down the river.

How have you been expanding the real estate portfolio for the Port Authority?

We’re basically a land developer. The products we’ve bought in St. Paul over the years typically have been contaminated in some way. During my pre-port days, I did retail leasing around the country, and I’ve worked in projects like Flint, Michigan, and Gary, Indiana, and I have seen what sort of contamination can arise from these old industrial sites. There’s contamination in the ground. What a lot of people fail to understand is that land values can be negative. Sometimes you may have land of a certain value, but the clean-up costs will drag it down. The private sector won’t want to touch that. So, we go in, clean it up and turn it into an active piece of property. We’ve developed 23 business centers throughout the city of St. Paul — with 550 companies and 25,000 jobs in these business centers. We won’t operate them. We’ll sell them to the businesses. That’s the real estate part we really want to do. Our statewide programs, through the Obama stimulus plan in 2008-2010, allowed us to do a product called PACE, Property Assessed Clean Energy. We’re one of those groups in Minnesota that can place PACE assessments on properties, which we’ve done on 63 properties. It’s a great way to move toward environmental sustainability.

How would you explain the relationship between Minneapolis and St. Paul?

I think I would say that Minneapolis and St. Paul, while not identical twins, are definitely fraternal twins. They’re 10 miles apart. As a metro area, we’re in the Top 16 in the country so it’s a powerful metropolitan area. There is political tension stemming from the contrast between the urban and rural, as evidenced in the last presidential election. We should learn to be more respectful of these differences.