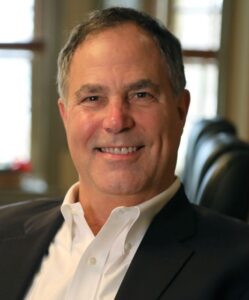 4 min read May 2022 — In an interview with Invest:, Lawrence Stuardi, president and CEO of real estate development and client services company MRA Group, talked about some of the challenges the company and many others are facing when it comes to lead times and cost of materials. Stuardi also discussed MRA’s project pipeline and the pros and cons of doing business in Philadelphia.

What have been some lessons learned from the last 12 months?

We have been reminded constantly that change happens at speeds we can’t control. The first thing I always consider are the needs of the 56 people who make up MRA because it all connects. We had to find out how we could make things work for them as well as the company overall.

Everyone has been going through the same trials and tribulations, but it is easy to forget that. Whether it is at work or at home, stress is being felt all throughout the region. Philadelphia has a high poverty rate, and there is a direct correlation between violence and poverty. The past year, especially, has proven that true and has particularly been concerning to me.

How have your projects been impacted by the events of the last year?

We are impacted by cost increases and delivery times. We are now ordering equipment before we know the final design of a building, and we find it necessary to design the building around equipment, to some degree. The rise in costs is reflected in all things large and small. For example, the price of the adhesive used to tie down a rubber roof has skyrocketed. It is just one small component of the entire project but it’s crucial.

We develop a significant amount of life science space, and it has evolved to the point where it is difficult to commit delivery dates to tenants because of the unknowns when it comes to lead times and costs. However, as always, we find ways to make it happen.

What industries in Philadelphia are experiencing the most growth?

MRA used to stand for Medical Realty Advisors because healthcare systems were our primary focus when I started the company 31 years ago. That evolved to also include universities and continued to evolve from there to include data centers and life sciences. To see the demand for life science space should not be a surprise but the market has not been prepared for this boom, so a need has been created. Philadelphia is fortunate to be the home of several excellent healthcare systems and research institutions that are driving the life sciences market.

What are some of the developments happening within the life sciences market?

The learning and growth that we are seeing is exponential and ideas are changing and coming to fruition at a much faster pace. CRISPR was not one singular thing that happened in one lab; it took collaboration that has now been increased tenfold because of the connectivity the internet provides.

As far as real estate is concerned, anyone with a roof with a vent on it is throwing in equipment and calling it life science space. It is easy to do at certain levels but what makes a space is a highly specialized infrastructure that is expensive to put in, at costs that are anywhere from $500 to $1,200 per square foot compared to a typical office space of $80 per square foot. Rents for life science space go anywhere from $30 per square foot on the low end to $80 on the high side. People who are not in real estate aren’t necessarily aware that while costs of construction are definable, the rent obtainable for space is also impacted by non-construction variables, such as vacancy rates, financing costs, etc. Therefore the increase in construction costs does not categorically translate to an increase in obtainable rents. We saw this during the savings and loan crisis of 1990-92 and during the Great Recession, so it will be interesting to see how it plays out here.

What key projects are in the works for MRA Group?

We are developing the Chestnut Run Innovation and Science Park, or as we refer to as CRISP, in Wilmington, Delaware, which was a part of DuPont’s Chestnut Run campus. CRISP is focused on life sciences, and we have signed several leases there with several more to be announced soon. Upon completion we anticipate that we will have over a billion dollars invested in the campus.

What are some of the changes in design clients are requesting and do you think they will be permanent?

Obviously, air exchange in buildings is huge. The ability to bring outside air into the building correlates directly to cost and what you are willing to spend. The pandemic has made people more aware of the environment within a building but that is also causing rents to go up in order to produce those results. We are all aware of the desire to have carbon-neutral buildings and everyone wants it, but unfortunately no one wants to pay for it. To become a LEED-certified building costs money, and if you are looking for a fixed return on investment the rents have to reflect costs.

We use sophisticated HVAC systems in our buildings that will reduce energy consumption by about 50%; however, the cost is about 50% higher than that of a standard mechanical system. Tenants see the benefit, but landlords have to decide between doing what is best for the environment and tenants or what is best for the investment. Obviously, the happy medium is achieving both.

It is being mandated around the country and the playing field will be leveled to some degree so that comparisons can be made equally. I’m not a proponent of government interference but, as Thomas Paine observed, the only thing worse than government is no government at all.

How would you rate the business environment in Philadelphia compared to other markets?

In my opinion, Philadelphia’s taxation system is antiquated and broken. There is a disincentive to do business in Philly. There are so many examples. For instance, a few years ago the city approached us to pay for medallions to attach to trash containers for a property we were managing in the city. They claimed that commercial property owners were responsible to pay for the right to have trash containers, which was separate from the cost of removing trash. For another project, a five-story office building with a 400-space parking lot, they wanted to charge us a tax per each parking space, as if we were a commercial parking garage, separate from the property tax. Fighting the barrage of nuisance taxes is an ongoing battle. That just drives up the cost of occupancy and gives companies more of a reason to move out of the city. Something has to change so that the city can thrive while still being conducive to encouraging businesses to stay and grow.

The cost of a business being located in Philadelphia is absurd, and makes people question why they would want to be in the city and what the trade-off is. In my mind that trade-off is likely our fine educational institutions, especially as human capital becomes more important. From a regional standpoint, people settle in the city because they can pull from the region, including New Jersey. For some, that balances out the taxation issue, obviously for others it doesn’t.

What is your near-term vision for Philadelphia and the industry?

I look at the skyline today and recall what it looked like in 1985. It is amazingly different and continues to evolve.  We have been behind other major cities in the sense they have been building skyscrapers since last mid-century, but we are starting to catch up. I wish I knew where the city will be in the next two to three years, but I don’t. I was hoping we would become a more people-focused, livable and desirable location. I do think there are great things about Philadelphia, particularly the people. I am a native Philadelphian myself, and I am proud to call this my home.