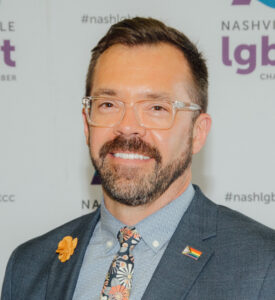 2 min read August 2021 —  The Nashville LGBT Chamber of Commerce advances common business interests, economic growth, and inclusion in the workplace and society. In an interview with Invest:, Joe Woolley, the Chamber’s CEO, discussed the importance of an inclusive environment to Nashville’s economic growth.

How important is an inclusive business environment to company relocations?

It’s the biggest concern they have in coming to Tennessee. We are perfect on taxes, incentives, benefits, startup costs and workforce. We meet all of the criteria of businesses that want to come here and open up shop. Their one concern is if this is a welcoming, inclusive place to live and work. These companies reach out to us and their first question to me is, “What’s it like for LGBT people to live there?” It’s not just LGBT employees wanting to feel welcome, it’s straight employees that have LGBT children who are going to live here as well. They want to know about the schools, what resources there are and what the issues are facing the LGBT community.

How important was inclusion in Nashville to major companies such as AllianceBernstein and Amazon?

All large corporations are very concerned about it. These companies are coming here but they’re not leaving their values at the state line; they’re bringing those values with them. They want to make sure their LGBT employees and LGBT children are safe and valued in this state.

We were at Alliance Bernstein’s Christmas party and their COO at the time, Jim Gingrich, looked at me in a big crowd of people of other chamber leaders, business leaders and government leaders, and he said, “You know why we’re here and not in the other city we were considering? Because we think that other city is in a state that’s going to have an anti-LGBT bathroom bill. Make sure that we don’t.” I said OK but that we’re going to need their help. We had 23 corporations speak out that year after AllianceBernstein did and it has only grown from there.

Amazon was the next big company that came to town. They had the same issues and the same concerns. They chose Nashville but they came in working with us from the very start. Before they were officially in Tennessee, and every year since, Amazon has spoken out vocally against discriminatory legislation. They are definitely the leaders in the state right now in working against discriminatory legislation.

How is anti-LGBT legislation impacting business in Nashville?

Every year, we have seen more and more anti-LGBT legislation. This year was a record-breaking year and a really bad legislative session in terms of discriminatory legislation. Tennessee had the most anti-LGBT laws filed, the most anti-LGBT laws passed and we are the first state to pass a bathroom bill since North Carolina in 2016. From the North Carolina bathroom bill, the conservative estimated loss to that state was $3.5 billion. We made this argument to legislators that this legislation would hurt our bottom line and economy, but they didn’t listen. Tennessee passed not one bathroom bill but two. One bathroom bill was clearly anti-business, forcing businesses that have inclusive bathroom policies to post a large sign on their door that says they do. This was a real wake-up year for businesses on this issue but also for legislators. We warned of this fallout and now we’re seeing this fallout with businesses and conventions looking at the state and considering going elsewhere or not coming. I wish legislators and the governor would’ve been more proactive in stopping these bills before they passed, rather than doing the cleanup after the fallout.

Amazon is just one company that will tell you they are having a hard time with employees wanting to stay here. They have to fill 7,500 jobs in two towers in Downtown Nashville. They’ve started that process and they have had employees come to them and say, “We don’t want to live here anymore. This is not where I want to call home.” They had moved to Tennessee to work here in Nashville, then we passed these bills and now they’re scared. Transgender individuals and parents of transgender children are scared of where they can go to the bathroom and if they can receive the healthcare they need. That’s a necessary part of life that you shouldn’t be fearful of. If the healthcare ban that is currently out there passes, that will be the bill that really makes people move.

How can companies improve their diversity, equity and inclusion efforts?

Young people are no longer choosing where to work on salary or the amenities you have; they’re looking at your inclusionary policies. Can they bring their whole authentic self to work and be respected? We see Corporate America competing to be the most inclusive place to attract that new talent to work for them. Companies are finally getting that it is inclusion and then diversity. Companies chase diversity, saying they need Black or LGBT employees. You need inclusionary policies on the front end to make them feel welcomed and want to stay, otherwise they’ll go to another company that has those inclusionary policies.

Why shouldn’t policymakers and business leaders ignore this issue?

For companies, if you can’t get people of color, LGBT people or parents of LGBT children to move to your state, you’re excluding a huge piece of the workforce. It’s the economics of these companies that you’re messing with. Nashville is 40% of the state’s economy and 60% of the tourism economy. A lot of rural legislators don’t think they’ll feel the economic impact of these policies, but they will feel economic consequences if Nashville hurts.