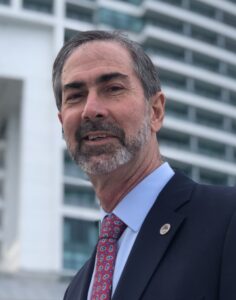 2 min read July 2021 —  Miami’s strong bet on becoming a tech hub and magnet for financial institutions not only in the United States but across Latin America make it a prime destination for banking players. David Schwartz, president and CEO of the Florida International Bankers Association (FIBA), shares his take on the vibrant future for Miami’s financial sector.

What pressing issues for the industry have emerged in the past year?

It’s still in compliance, across the board. No. 1, spending has increased. In fact, there have been challenges during the pandemic in staffing up because banks needed more resources since they were not on site. Finding those resources has proven challenging. At the end of 2020, Congress passed the Annual National Defense Authorization. Contained within that act was something they called the Anti-Money Laundering Act of 2020. The act incorporated several bills that had been floating around Congress for quite some time, most notably one on corporate transparency, which has always been a criticism of the United States. We are always challenging countries in the Caribbean, Central America, particularly Panama, in terms of corporate transparency, yet the United States is probably the leader in non-transparency. While it’s going to take some time to implement, it’s poised to change the game. There is a lot contained in this legislation — corporate transparency, whistleblower provisions, a new subpoena authority — which could have a significant impact on correspondent banking because it allows the Department of Justice to subpoena not only records from a foreign bank that may have an account in the United States but also records from any of that bank’s clients, anywhere.

Number 2, cybersecurity is a critical risk for banks at a time when digital transactions have increased exponentially. There is also the issue of fraud. Those risks increased so much that the Financial Crimes Enforcement Network (FinCEN) responsible for the U.S. anti-money laundering program, issued guidance not just in English but in Spanish regarding cybersecurity and fraud risk. That tells you how concerned they are with the potential impact on the U.S. financial system. Compliance is still the No. 1 issue but cybersecurity and fraud are very close behind.

What is your assessment of the impact of the historically low interest rates in the long term?

The Federal Reserve has signaled that there will be rate increases probably in 2023. Chairman Jerome Powell is sticking to his mantra that inflationary risk is transitory, that because of the pandemic, because of the shutdown of factories, we do have some scarcities and that is creating some absolutely incredible price increases. If it is transitory, I still think that rate rises will have to come. It’s one thing to say it is a transitory situation for inflation but once those prices go up, will they go down in certain areas? Some things will improve and certain commodity prices will come down, so that will not be so much of an issue. The big concern that we see is in the labor force because right now we are seeing pricing go up. There is demand, but no supply. Businesses are offering $15/hour wages or higher, looking at offering benefits, offering bonuses. It’s unprecedented for businesses such as McDonald’s, Wendy’s or Burger King, and that’s just one industry. We have a scarcity of computer chips that impacts the automobile industry, not just computers. Until that supply recreates itself, we are going to have issues. The bigger question is what is going to happen to labor costs. If they do have to go up, pricing in certain industries is not going to come down because you do have that increase in cost and as we know, increases in cost for the company are passed down to the consumer. We anticipate the spike to be transitory but the impact will have a longer-term effect.

Miami is the Latin America gateway. Our mayor has also been aggressive in the technology space, in the fintech space. We launched an initiative this year on open banking, directly related to fintech collaboration with financial institutions. We see banks understanding more that they must innovate, as we have been telling them for the past five years. Don’t look at these people as competitors. Look at them as potential collaborators because your customers are looking at them. Your customers are seeing the efficiencies, the lower cost. That space has become very important. The eMerge Americas event was launched here several years ago. Part of the idea behind the birth of eMerge was to have Miami develop as a technology hub. We’re seeing all of these different initiatives finally coming together.

What is your general outlook for Miami’s banking and financial sector?

The sector is growing. In spite of the pandemic, we’ve had new entrants in the market. That’s always a great thing to see. We’ve been contacted by a couple of other institutions from Latin America that are exploring the idea of either opening an office in Miami or perhaps acquiring an institution. Obviously, the easiest way to get into the market would be to acquire a local bank. There are not very many left that are available at this point, so it is a question of being able to understand how the market works, the regulatory space. We’re having discussions with both the federal regulator and the Florida regulator about these institutions that want to come in and they are very open. They are extremely open even to the point of having preliminary meetings with anybody that is interested in establishing a bank in the market. Typically, you have to hire a law firm to help you try and get through the licensing but here you have the regulators actually offering to explain to you how you need to go about it, what it is that they are looking for, which is even more helpful in the process because they are the ones that give the approval. Miami is open for business.