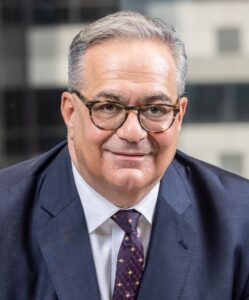 3 min read June 2022 — Invest: spoke with Christopher Paladino, president of the New Brunswick Development Corporation (DEVCO), and discussed the redevelopment happening in the city, with a focus on higher education and healthcare innovation. “The concept is to build an ecosystem where academics, medicine and entrepreneurs have world-class facilities where they can collaborate,” he said.

What have been your key takeaways from the past year and how have they shaped your priorities for 2022?

To quote Charles Dickens, it was the best of times, it was the worst of times. We broke ground on the new Jack & Sheryl Morris Cancer Center at the Rutgers Cancer Institute of New Jersey. This building will not just change access to healthcare in an extremely qualitative way for local residents but for the entire state of New Jersey. That was a $700 million investment for 500,000 square feet and will be the only standalone cancer center in New Jersey. It will also be the state’s only National Cancer Institute-designated facility. It’s an extraordinary engineering and architectural marvel, with an inpatient facility for 100 patients and nine operating rooms. The central utility plant is designed to always operate at 100% capacity but also to never go down. The employment base will be expanded to an additional 600 people. It’ll also bring in 1,200 construction workers for the project. It includes 30,000 square feet of oncology research space. It’s funded by RWJBarnabas Health, plus a $150 million grant from New Jersey for Level One Trauma Preparedness.

What has been the impact of the NJ Innovation and Technology Hub on New Jersey’s life sciences sector?

The concept is to build an ecosystem where academics, medicine and entrepreneurs have world-class facilities where they can collaborate. Companies usually expand and hire people within 20 miles of where they were founded. There is an extraordinary amount of talent not only out of Rutgers University but from our other partners, including Princeton University, Hackensack Meridian Health Systems and RWJBarnabas Health. We are ready to break ground on approximately 170,000 square feet of innovation space, including wet labs, dry labs, studio spaces and shared meeting rooms. It is a space that encourages work in the life sciences and artificial intelligence. The New Jersey State Legislature is also signing an incentive program for transformative projects over a half-million square feet.

We are joined by the largest life science investment in state history. Rutgers has committed to 240,000 square feet of translational research space. There is an extraordinary opportunity to accelerate research that is being done at the university level. This facility is ready for 80 new principal investigators who will be recruited over the next three years from institutions all over the world with large research grants. With these teams, it will bring up to 800 researchers to the New Brunswick ecosystem. New Jersey has been known as the medicine chest of the world and some of the largest companies are headquartered here, but a lot of that science was done obscurely in the suburbs. Today, research is done collaboratively in urban environments. This project grew with Rutgers committing their translational research initiative to the building.

We also moved the Rutgers RWJ Medical School to Downtown. In one building, we have 500,000 square feet that has academic translational research, state-of-the-art training, the next generation of doctors with simulation and anatomy labs and also a place for startups and entrepreneurs to grow their science into the next generation of New Jersey companies. When we’re finished over the next 36 months, we will have 1,400 people working and going to class in Downtown New Brunswick. It’ll change the tempo of discovery and job creation and provide a diverse and intellectually curious addition to the city.

How does the NJ Innovation and Technology Hub specifically support startups and entrepreneurs?

The startup phenomenon is fascinating because it’s not just a 30-year-old post-doc microbiologist starting up companies. It’s also people at the end of their careers leaving pharma and biotech who may not have gotten the support they needed and had something they wanted to pursue on their own. We live in a state where there are more engineers and Ph.D.s and scientists per square mile than anywhere else in the world. We’re creating a real ecosystem that will foster the next boom in life science, artificial intelligence and computer science.

What does the New Brunswick of tomorrow look like?

We have a million square feet to complete and work with Middlesex County and the community college and vocational schools to create more job opportunities. We’re building a new train station and expanding the Hub in the next 12 months with another million square feet. We want to attract more established national life sciences companies to work there. We also want to create new housing and retail to energize that ecosystem.

What’s important to understand is that 5,000 people live within four blocks of our office who hadn’t lived here before. The tempo of the street has changed dramatically and it will exponentially change again. We’re minutes from Newark Airport and a half hour from Manhattan. Rail infrastructure is also improving so it’s been all about location. There was a real decline of urban centers in the Northeast during the 1960s and ‘70s but what will keep New Brunswick vibrant is that it changes. Cities that don’t change don’t prosper. It has also been an attractive place for immigrants, so it has great diversity. They create an entire new vibrancy in the city. Horizontally and vertically, we are a growing, responsive and exciting community.