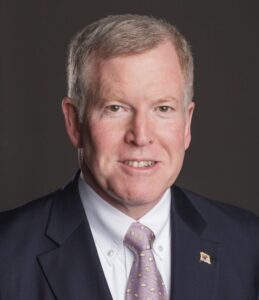 4 min read March 2022 — New Jersey is taking ambitious strides in addressing climate change and is striving to increase its reliance on renewable energy.  Commissioner Bob Gordon of the New Jersey Board of Public Utilities spoke with Invest about the state’s clean energy initiatives, including its groundbreaking efforts to become the home of the Mid-Atlantic’s offshore wind industry.

What were your goals for the past year and what challenges did you face?

As New Jersey’s public utility regulator, the Board’s longstanding goal is to ensure that the state’s investor-owned utilities provide their services in a safe and adequate manner and at a reasonable cost to the ratepayers. In addition, under Governor Murphy’s leadership, the Board is working to increase the state’s reliance on renewable energy and address the challenge of climate change. The pandemic certainly complicated both missions.

COVID had a profound impact on the utility sector.  All of the major utilities in the state are facing an exponential increase in unpaid bills and implemented new procedures to protect their employees and their customers. The Governor issued a number of executive orders to provide relief to cash-strapped ratepayers, and we at the Board expanded opportunities for financial assistance.  At the same time, we continued the process of designing and implementing the Governor’s clean energy initiatives.  In some ways, the virtual meetings that became common in the pandemic made the process easier.

In what ways is New Jersey leading the nation in clean energy initiatives?

New Jersey has long been a leader in the development of solar energy, and we are doing ground-breaking work in creating an offshore wind industry. We are among the top ten states in the number of solar projects and number one in terms of projects per square mile. Despite the impediments created by the pandemic, the state is on-track to achieve Governor Murphy’s goal of 100% clean energy by 2050. The Governor’s Energy Master Plan, issued in 2019, establishes a target of nearly 60% of electricity from solar and offshore wind, and calls for continued reliance on nuclear power.

During the past year we have made major strides toward those goals.  We have totally revamped our solar program to make it more cost-effective and responsive to market forces.  We established a community solar program that allows any citizen—homeowner, business or tenant—to reap the financial benefits of solar power. We launched an electric vehicle initiative that provides cash on the hood for EV purchases and encourages our utilities to build the required charging infrastructure. In addition, we are partnering with our utilities to encourage major improvements in energy efficiency. And most exciting for me is our progress on offshore wind. Here, we are truly leading the nation because the projects now under development will produce 7,500 megawatts of electricity, enough to power 3.2 million homes.  Together with our new Windport, the largest port facility dedicated to offshore wind facilities, these projects will generate $5 billion in economic benefits over their lifetime and create thousands of new jobs.  The overriding challenge is to achieve our clean energy goals without creating an undue burden for our ratepayers. We are mindful of the cost impact of everything we do.

How will the diversity of your portfolio impact the residents of New Jersey?

Governor Murphy has made clean energy a state priority because addressing climate change is critical to the health and economic well being of every citizen. In the long term, reducing our greenhouse gas emissions will reduce the risks of sea level rise in a state with a highly developed, 130-mile coastline. In the near term, greater reliance on power generated by solar, wind and nuclear sources, in combination with our efforts to electrify transportation, will clean the air and reduce the incidence of respiratory disease, particularly in our urban areas. Just as important are the economic benefits. Creating the supply chain for offshore wind, solar and other renewable energy technologies will mean tens of thousands of new, high-paying jobs and billions of dollars in new economic activity.  New Jersey has a distinguished history as the home of innovation. From Alexander Hamilton’s first factories, to Thomas Edison, the transistor and bio-pharma, New Jersey has been the place where new industries were created. We are going to make renewable energy the next big thing.

How will the infrastructure bill impact projects in the pipeline?

There are components of the approved infrastructure bill that provide funding for a number of clean energy programs. The legislation will support our vehicle electrification initiatives and will also allow us to upgrade our transmission grid so that we can increase its capacity and improve its reliability.   In addition, we will see billions of new dollars invested in transportation infrastructure, including roads, bridges and mass transit, all critical elements in a state economy dependent on moving people and goods. The most important project, in the state and in the nation, is the Gateway Project. This multi-billion dollar initiative will rehabilitate 100-year old rail tunnels under the Hudson River and will fund the construction of two new tunnels. Work has already begun on a key component of Gateway, the Portal North Bridge, which is  the choke point of the Northeast Rail Corridor. Gateway is critical to the entire region as it provides hundreds of thousands of commuters with access between New York and New Jersey. In addition, we would like to see more resources devoted to water utilities for the replacement of lead service lines. We hope that the Build Back Better bill now being modified on Capitol Hill will address that issue.

Which partnerships have been important in implementing your clean energy initiatives?

New Jersey rejoined the Regional Greenhouse Gas Initiative, which consists of a consortium of states that have agreed to reduce their emissions, create financial incentives for the reduction of greenhouse gasses and make investments in clean energy infrastructure. We’re also working with neighboring states to coordinate the development of charging infrastructure for electric vehicles.    Looking ahead, I believe there is a great opportunity for the states along the Atlantic Seaboard to collaborate in the development of an offshore transmission system, a transmission “backbone”  to move offshore power to the onshore grid in the most cost-effective, environmentally unobtrusive manner.  The federal government can play a key role here, much as it did in the development of the interstate highway system.