Space and power: Dallas’s strength in the data center industry

Space and power: Dallas’s strength in the data center industry 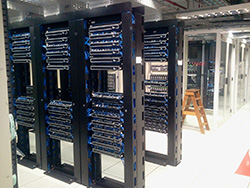 November 2017 – As cloud computing matures and companies of all sizes have increasing IT needs, data centers have become big business. These vast warehouses full of networks of processors are used for the remote storage, transmitting and processing of data. As of October 2017, there are 56 data centers in the Dallas-Fort Worth area, the third highest in the nation behind New York City, with 97 and Washington D.C. with 77, but beating San Jose, CA with 51.

Dallas’s strength as a hub for data centers can in part be traced back to the mid-1990s, when Texas became the center for a new fiber-optic network for the U.S. designed to help county-wide telecommunications networks. The robust telecoms infrastructure combined with ready access to power bought advantages when retrofitting a number of empty building in Dallas during the 2000s. The State of Texas has an independent energy grid, creating an extra level of security for companies worried about power black- and brown-outs, such as the 2003 East Coast blackout. Dallas’s central position in the country also means low latency on data transfer for nation- and world-wide companies.

Real estate and electricity prices both offer good value for companies looking to the county for their data needs. Texas produces more energy than any other state in the U.S., according to the U.S. Energy Administration Agency, and JLL Research in 2016 claims that the average cost of energy was $0.054 per kilowatt-hour in Dallas, compared with $0.12 in the San Francisco Bay area and $0.052 in Northern Virginia, furthering this point.

Due to the nature of the market, data centers are measured in power capacity. As of March 2017, total inventory in the Dallas-Fort Worth market is 208 MW, according to CBRE. This makes it the second largest market in the U.S. by capacity, behind Northern Virginia, with 557 MW, and ahead of Chicago, with 192 MW. According to the Data Center Frontier report published in 2016, the market in Dallas-Fort Worth is growing at 20 MW per year.

As of the second half of 2017, there are 10 major data center projects in the Dallas-Fort Worth area. In October, T5 Data Centers opened a new 156,000-square-foot data center on its Plano campus in Collin County, adding 10.75 MW of capacity and bring the total campus capacity of up to 28.75 MW. Also in October, Dallas-based IT real estate company CyrusOne broke ground on a 66-acre project in Allen, Collin County. It will be the first data center in a three-part project that will result in a campus of 1 million square feet with a total capacity of 100 MW.

“The Dallas-Fort Worth Metroplex has always been a strong market for CyrusOne, and we continue to see growing demand from customers to scale with us. Allen is a business-friendly community, and its proximity to Dallas makes it an ideal site for our new state-of-the-art data center campus,” said John Gould, executive vice president of global sales for CyrusOne in a press release.

The Dallas-Fort Worth area is already home to Facebook’s $1-billion data center, which opened in May 2017. The company is already expanding by an extra 100 acres, with construction costing a further $267 million. In August, Digital Realty Trust announced the first phase of a three phase $1 billion data campus on a 47.5-acre piece of land in Garland. When complete the project will bring capacity of 150 MW. The area is already home to a 388-million, 200-000-square-foot data center that was opened in the first of 2017 by RagingWire Data Centers. Also the first part of a three-phase investment, when complete the $1-billion campus will have 80 MW of capacity. Other companies with completed or planned data facilities in the Dallas-Fort Worth market include Skybox Data Centers, RagingWire and Digital Realty.

The first half of 2017 saw investment worth $18.2 billion in the U.S. data center market, according to CBRE. The need for greater storage, more complex data processing solutions and greater security concerns have led to a larger number of companies are migrating to cloud-based IT solutions. Faster and more reliable internet connections mean that off-site data-servers are often the most cost-effective and practical options for companies of all sizes. All this suggests that the data center market is far from peaking. Dallas is well positioned to make the most of the potential.